When the dynamic PR People of Renault Belgium Luxembourg invited us to drive in the GT Tour of the already iconic Zoute Grand Prix with a new limited edition Renault Alpine A110, we took the invitation of course with both hands.
The Alpine A110 has established itself as a pure sports car with authentic driver’s appeal since it got introduced two years ago on the Geneva Motor Show. Indeed, the bold successor of the legendary ‘Berlinette’ has the looks and all the driving characteristics to inspire you, yet remains in ‘look and feel’ so true to its original heritage. 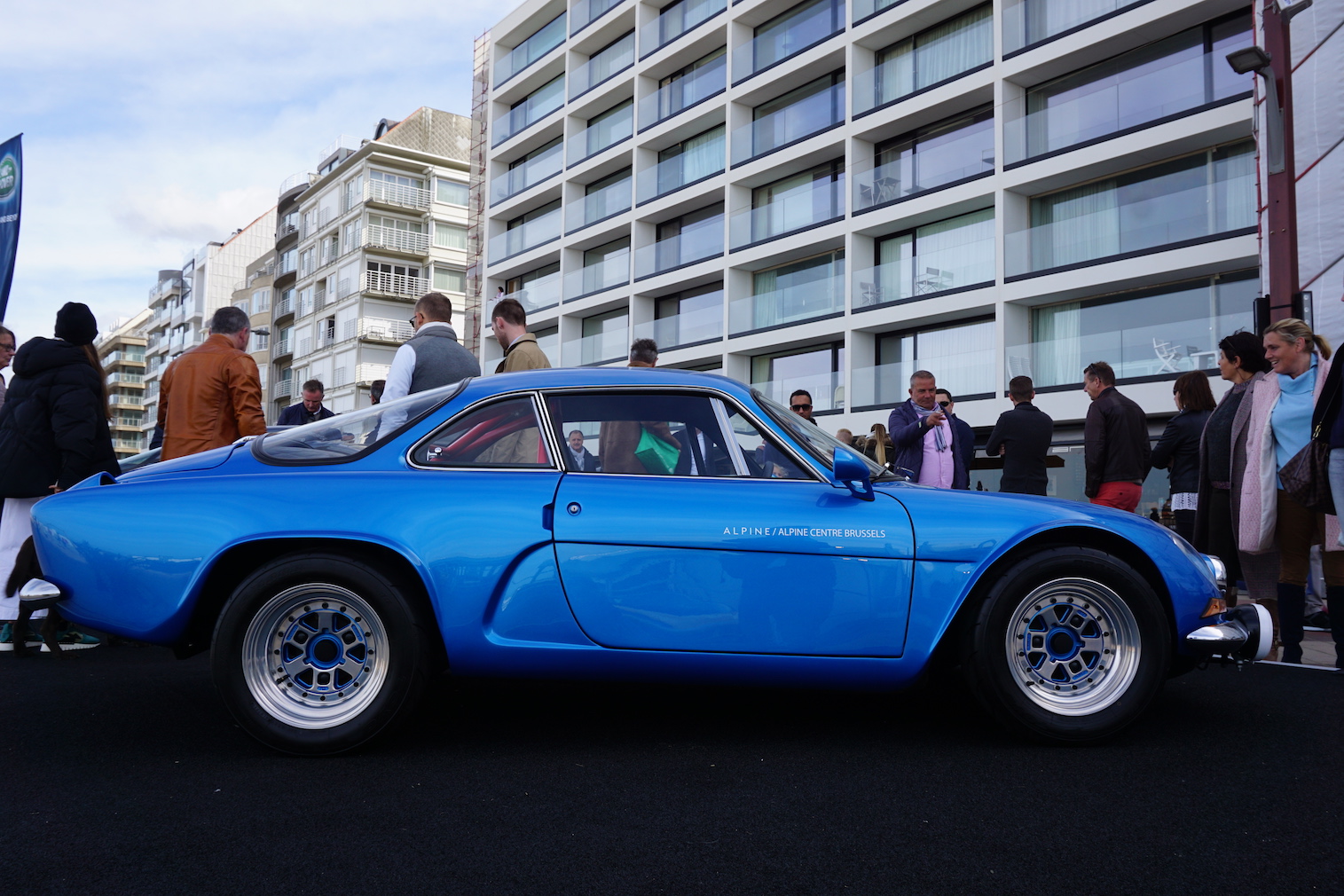 ” And if we think all the cars we have driven from a Bugatti Chiron, over loads of models from Ferrari, Porsche, Bentley, Maserati, McLaren to Caterham and Lotus there is no other car we would have wanted to participate this GT Tour in than the Alpine A110.” 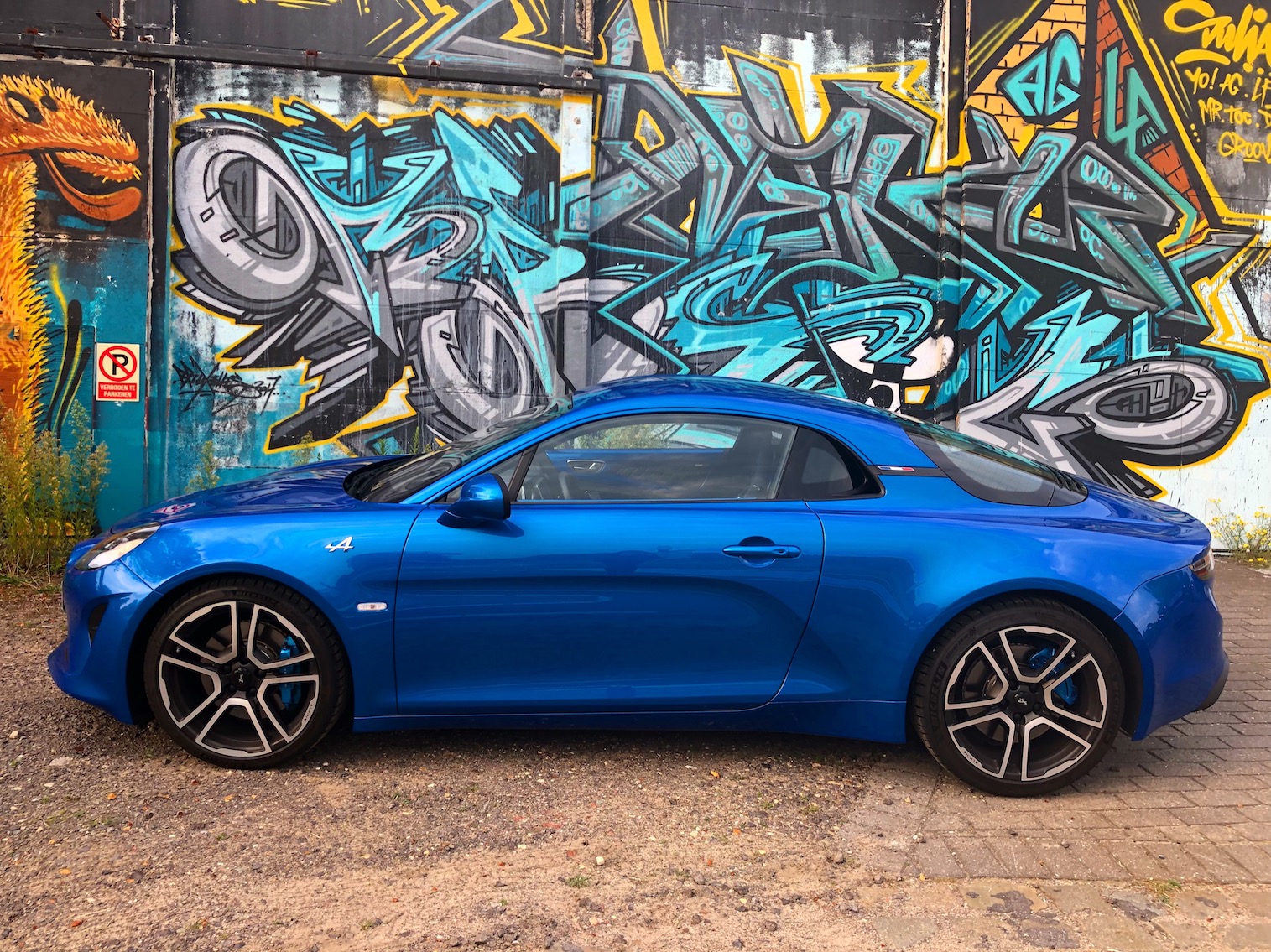 We remind you here that the A110 has won the hearts of public web voters, which acclaimed this Alpine to be the Most Beautiful Car of 2017. Indeed, the new A110 looks stunning, and its fluent lines exude the character and stance of the ‘Berlinette’ It has the same feline contours and also its nimble, elegant compactness. This translates also in a kerb weight of barely 1,080 kg, and we don’t have to tell you what this means in terms of agility and handling, of which more here later.

The organizers of the Zoute Grand Prix do not only cater for the happy owners of classic cars, they have also an eye for the superb GT cars which have hit the road over the last 20 years. So they put up the GT Tour, held on Sunday October 7 during their three day event. The GT Tour run through the magnificent Flemish and Dutch countryside around Knokke. 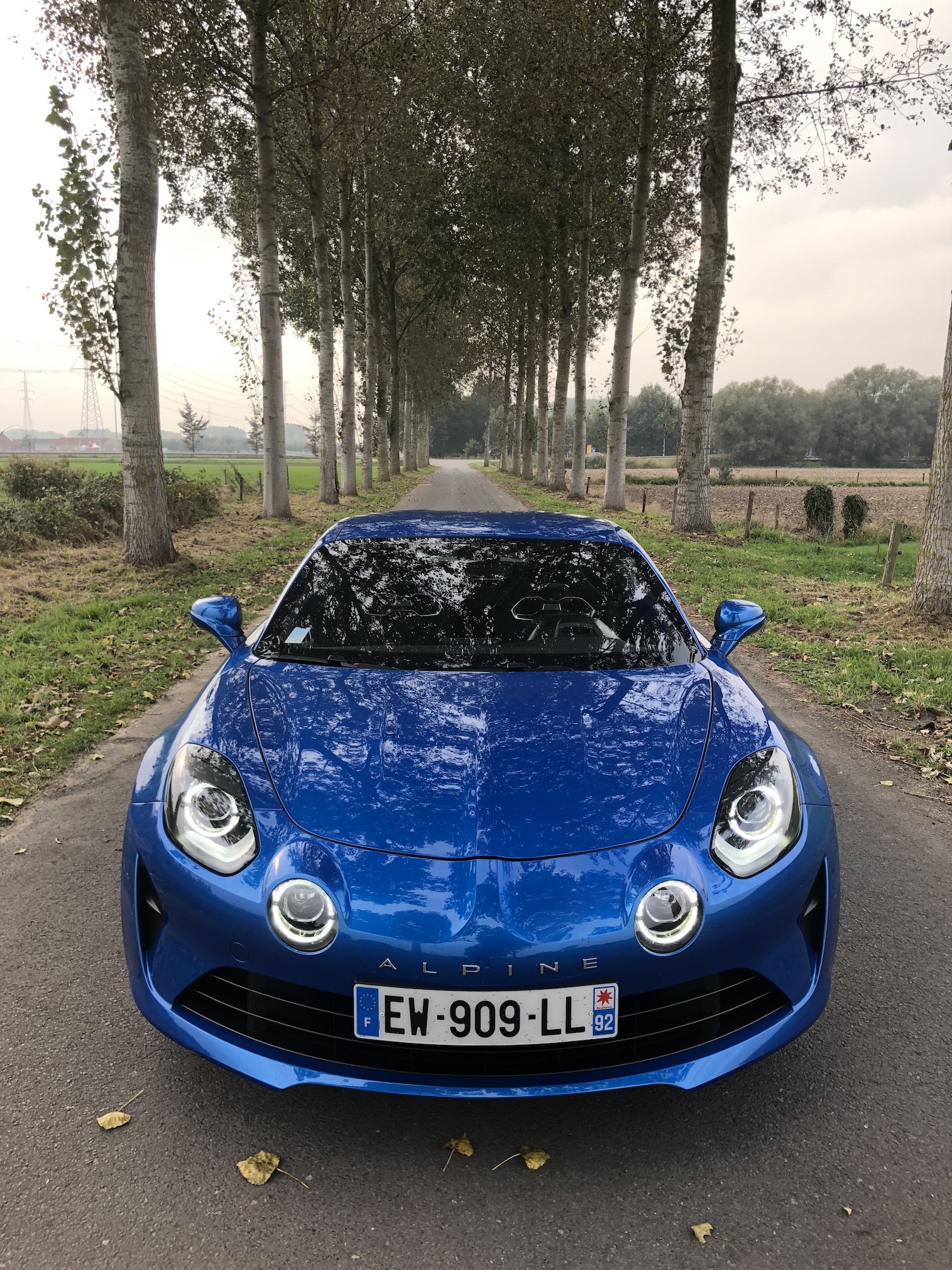 It’s not even 7h30 on a Sunday morning when we arrive at the Lichttorenplein in Knokke. Here we park our Alpine A110 in a long row of exotic GT cars that will start departing from 9h24 onwards. A particular timing but no one seems to be able to explain us why this exotic departure hour has been chosen. We make sure we get all the necessary documents, our car inscription – we get number 181 – and set of for a delicious breakfast with nice view on the sun rising over the sea. 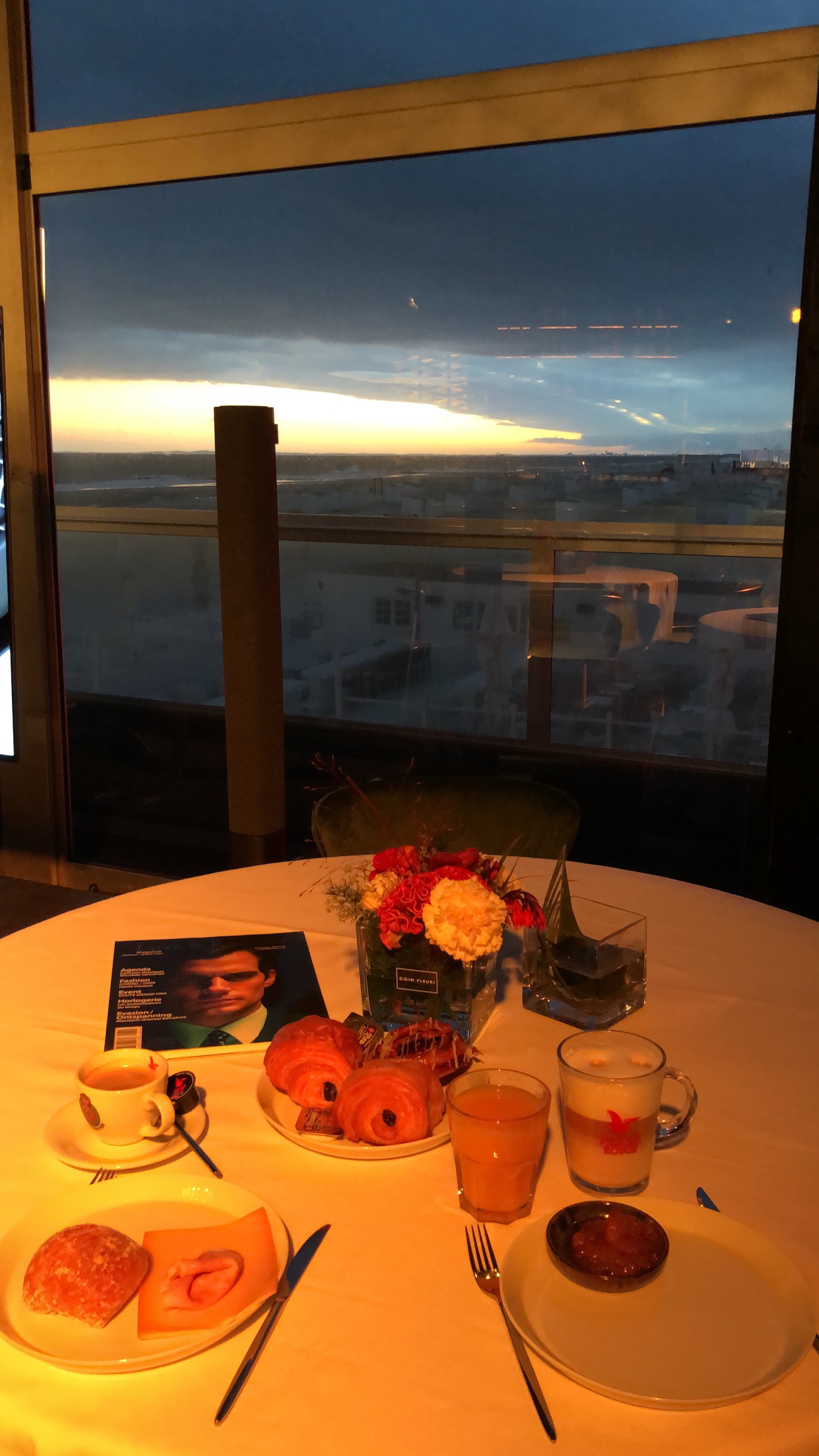 Breakfast with a view @Zoute GP 2018 in the Driver’s Club. 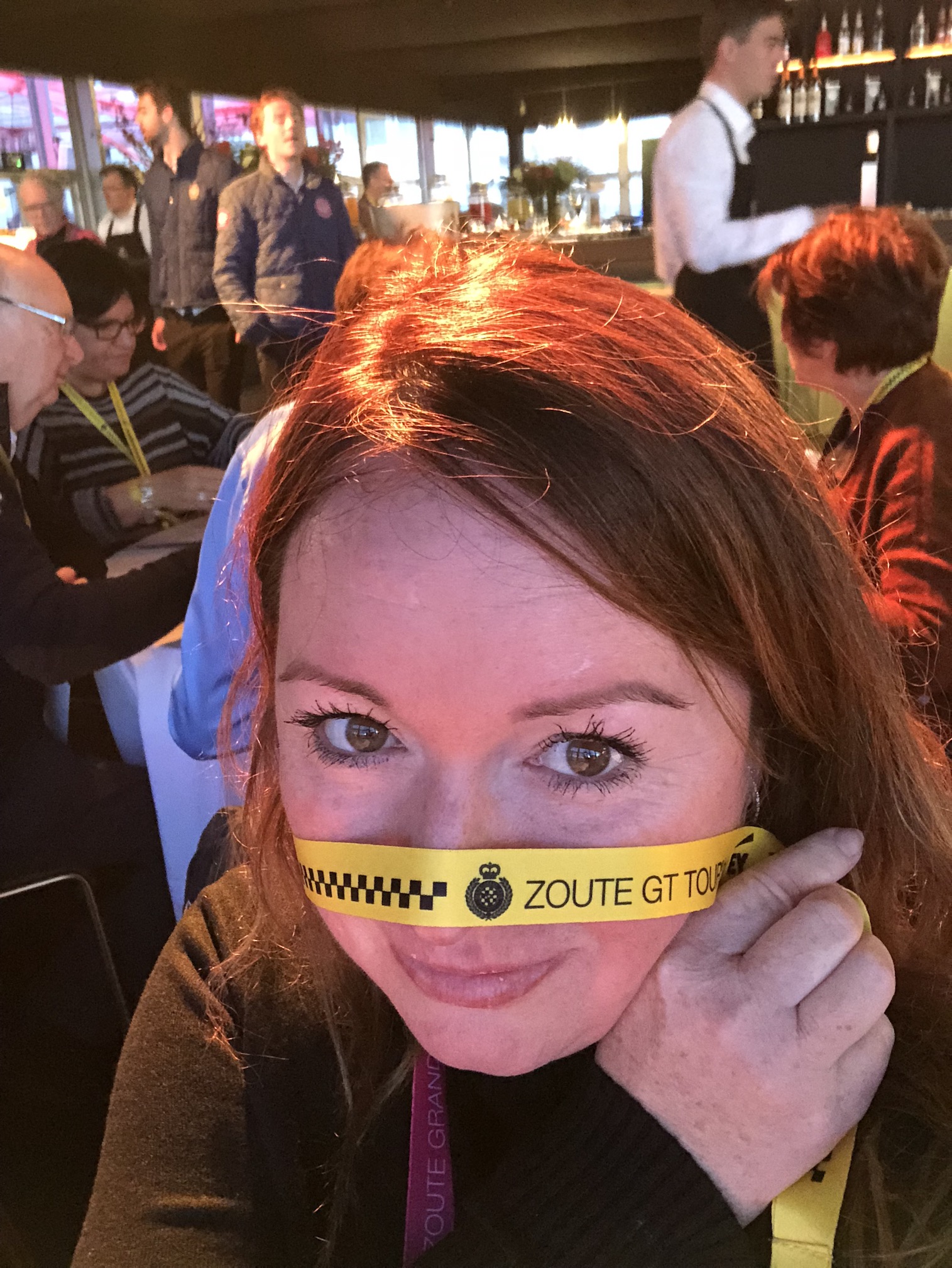 And then at 9h24 le moment supreme! Roaring engines and some car enthousiasts wasting some gas to please the spectactors… the 210 cars in total get ready for departure and one by one head of. My co-pilot Hans Knol ten Bensel and myself in a Renault Alpine A110: a true feast for talented drivers… 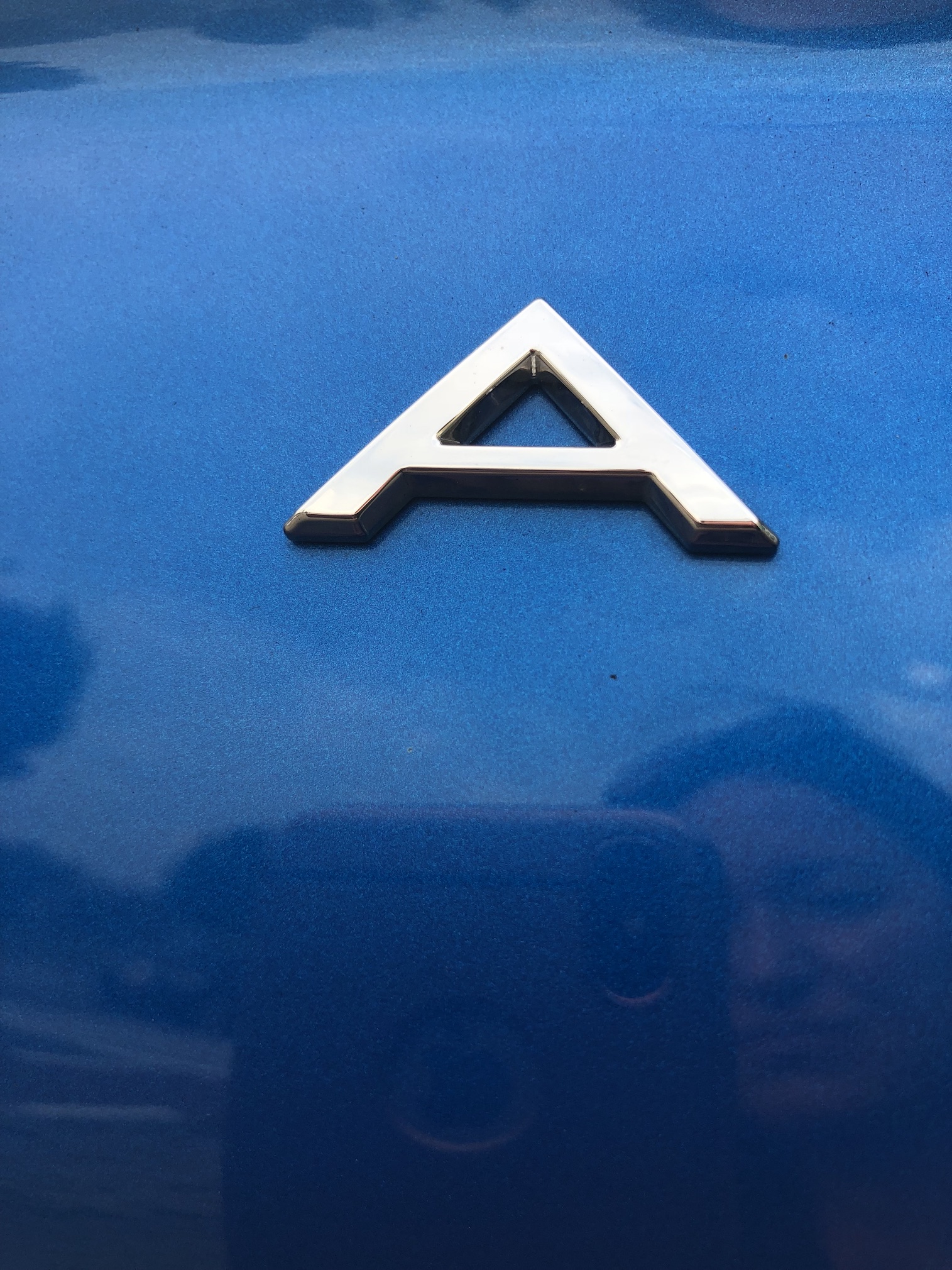 The GT Tour led us through the Zwin waters to neighboring Dutch Sluis, then through magnificent tree lined fields and canals to the Breskens fishery port, coming back through medieval and eternally inspiring Damme and its canal connecting this city to Bruges. 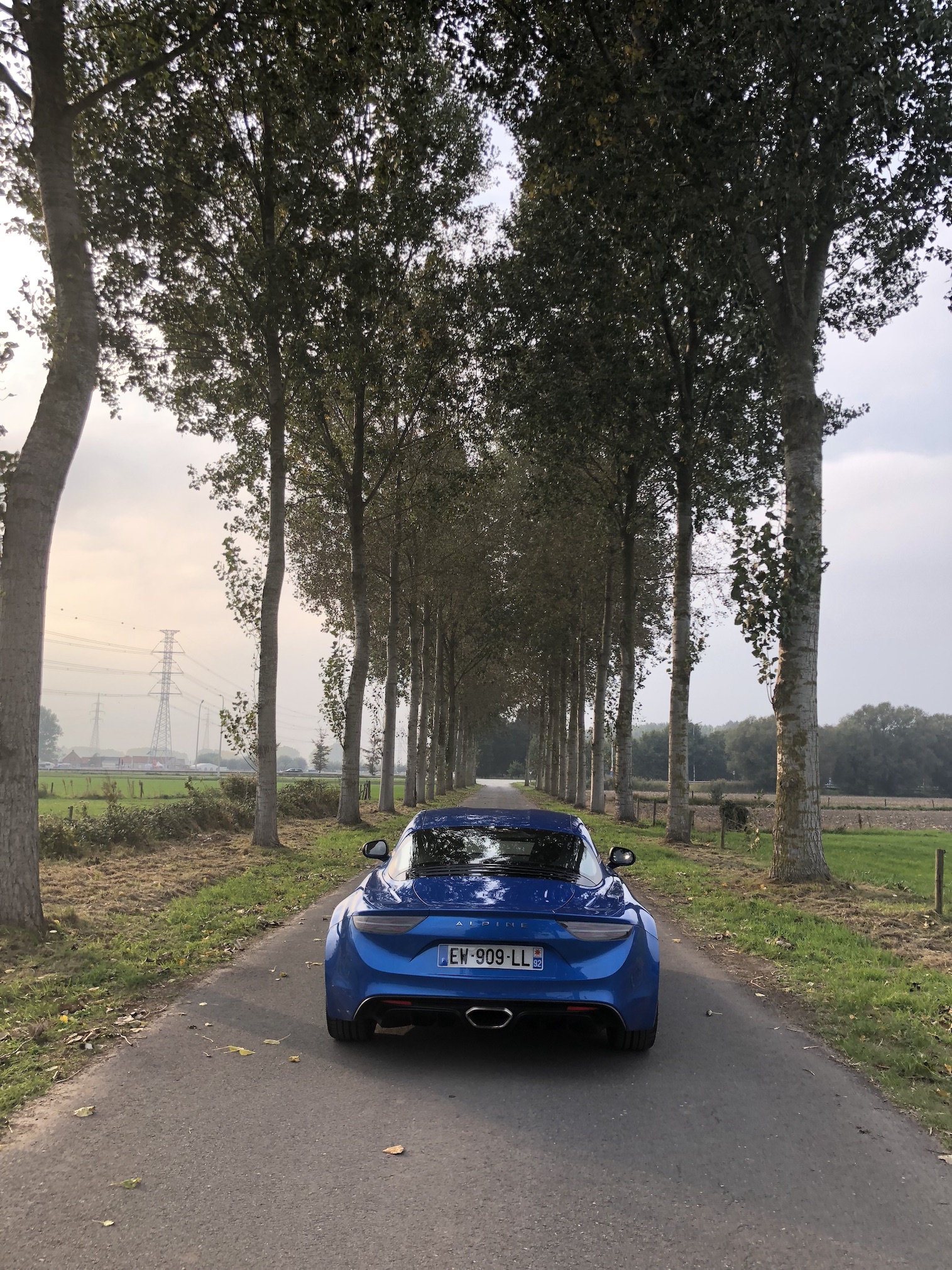 When judiciously respecting urban and regional speed limits (if you exceed the speed limits with over 10 km/hour you are excluded to participate in the GT Tour next year!), the A110 admiringly unfolded its smooth, docile character, which indeed makes this thoroughbred your ideal everyday companion in this congested modern day and age. It is totally happy to potter along, the 252 HP 1,8 litre turbocharged engine humming sweetly, helped by the ever so smooth auto gearbox. The Alpine is also utterly comfortable, its suspension coping very well with sleeping policemen, bumps and ridges which urban architects now have put in store for us. 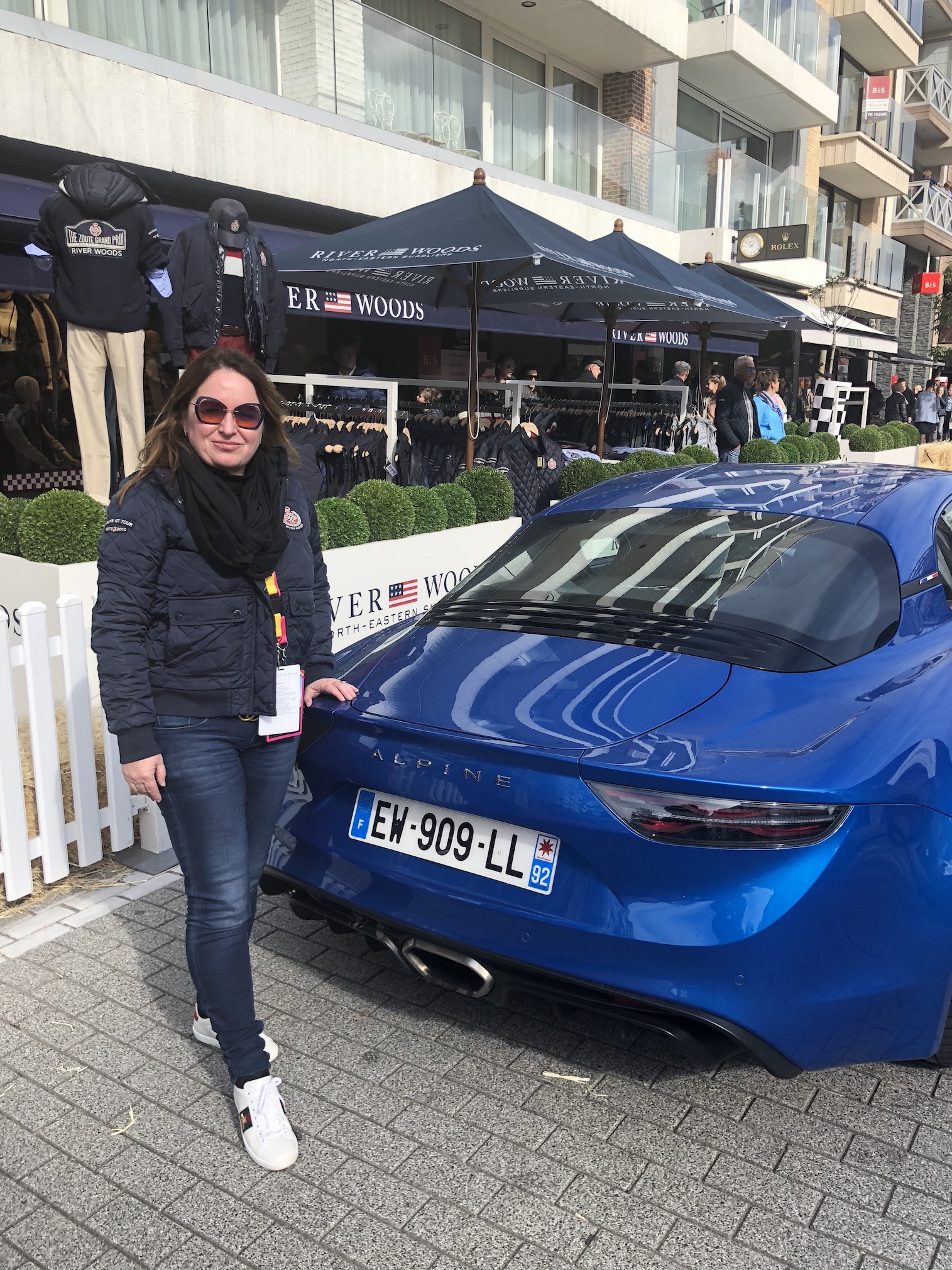 But of course it unfolds its true character when you put it through its paces. Its agility and nimbleness is nothing short of breathtaking. It was a formidable contender on the slalom tests, turning flat and stable, coping totally well with the power of its 1,8 liter four pur-sang unit. The engine roars to a heavenly staccato, but the deep throb or rather growl is never obtrusive and what makes your car loving heart even pound faster is that this sound is so similar to the Rallye “Berlinettes”, where a Renault 1,8 liter four cylinder also powered the winning car of Jean Claude Andruet in the 1973 Monte, winning the event just 26 seconds before his Alpine team mate Ove Andersson… 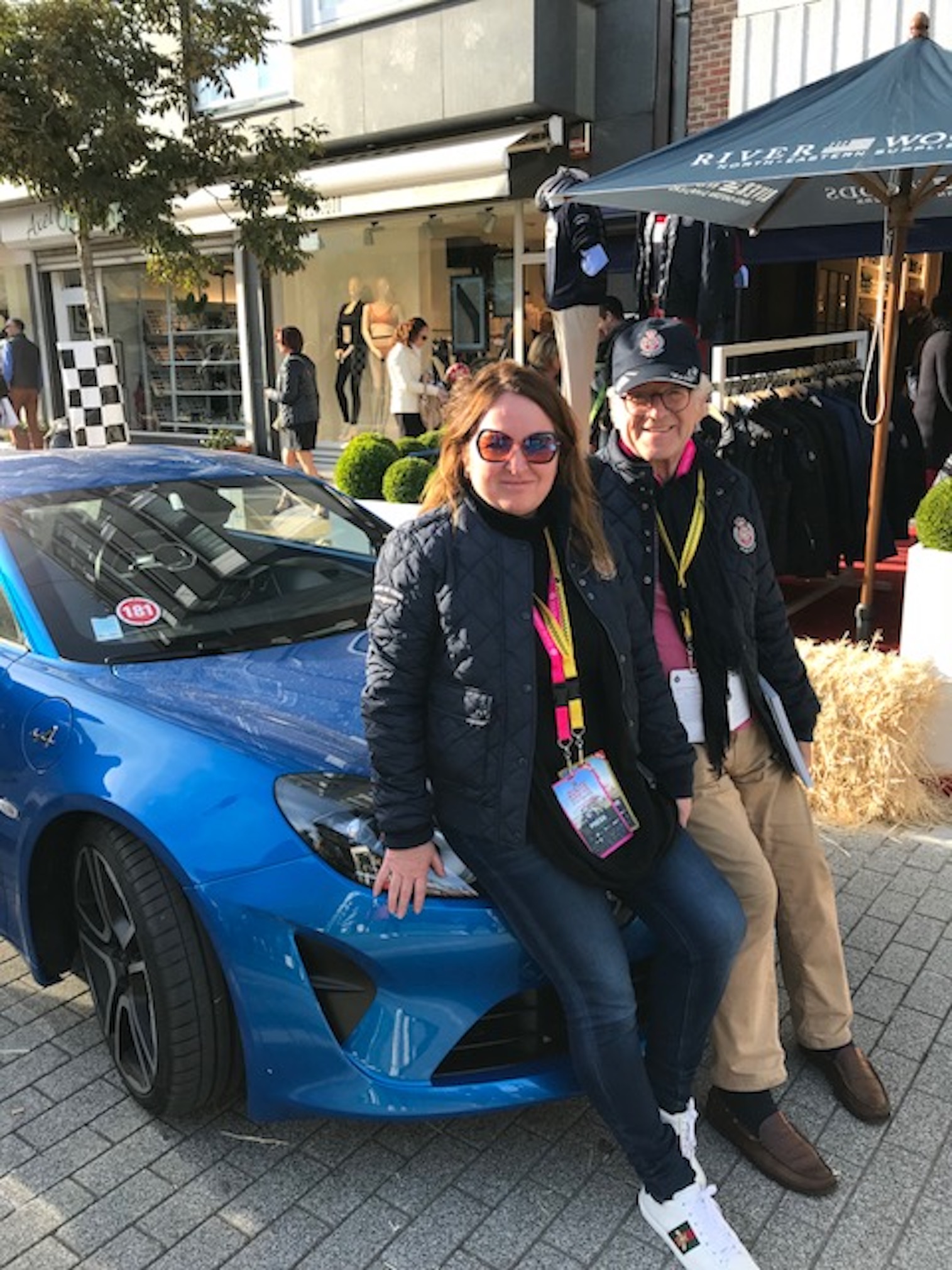 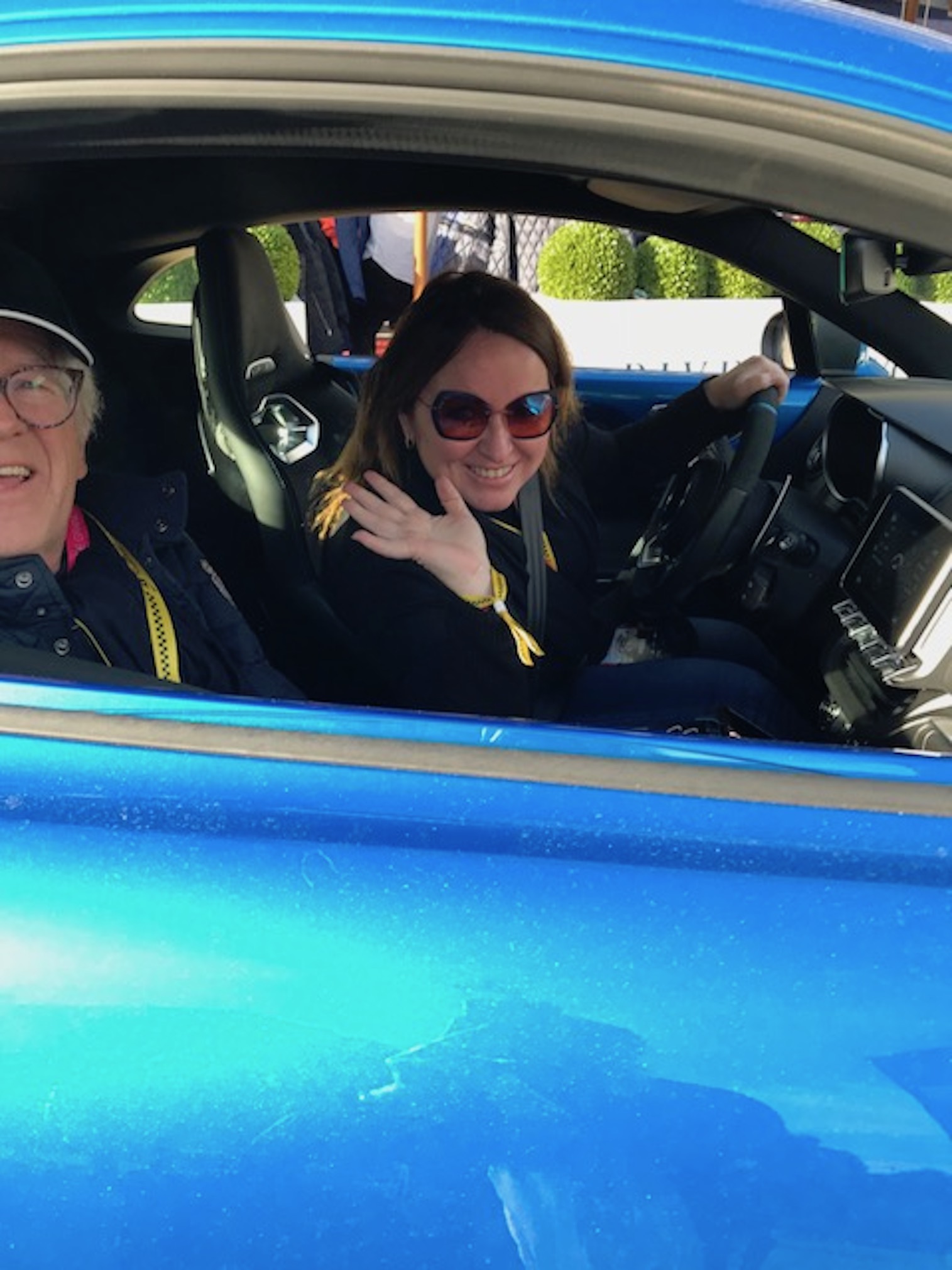 On the GT Tour, we also enjoyed the excellent seating comfort. Indeed, the beautifully designed seats wrap around your body oh so snugly to let you withstand cornering forces with utmost ease. Legroom is absolutely vast, leaving room for roadbooks, timing charts and cameras between the legs of the co-driver comfortably as the only disadvantage of the car is storage space in the doors (but we were told that Alpine is working on that for the next editions).
Slalom performance is absolutely breathtaking, braking and acceleration power when negotiating chicanes leave nothing to be desired. Of course, a lot depends here also on driver talent, so we cannot really compare. Safe to say that we were equally fast in the slaloms than a BMW M4, Aston Martin Vantage, Mercedes AMG GT, Lamborghini Uracan, Audi R8 Spyder.
On the quarter mile, the advantageous power to weight ratio truly tells. We just floored the accelerator, and left the gearbox in the “D” position, and had a go. This resulted in us being faster than a Porsche 991 2 GT3, Alfa Romeo C4 Editione Corsa, Ferrari 488 GTB 2017, BMW i8 Roadster… Here also it is fair to say that driver alertness can shave off some hundreds of a second, but nevertheless, it shows that the A110 can hold its own very well amongst the GT supercars… And if we think all the cars we have driven from a Bugatti Chiron, over loads of models from Ferrari, Porsche, Bentley, Maserati, McLaren to Caterham, Lotus,… there is no other car we would have wanted to participate this GT Tour in. Needless to say that its compactness and agilty make it a much better companion in the slaloms than the bigger cars and as compared to the Lotus Elise or Exige, the Alpine A110 offers much better seating comfort. 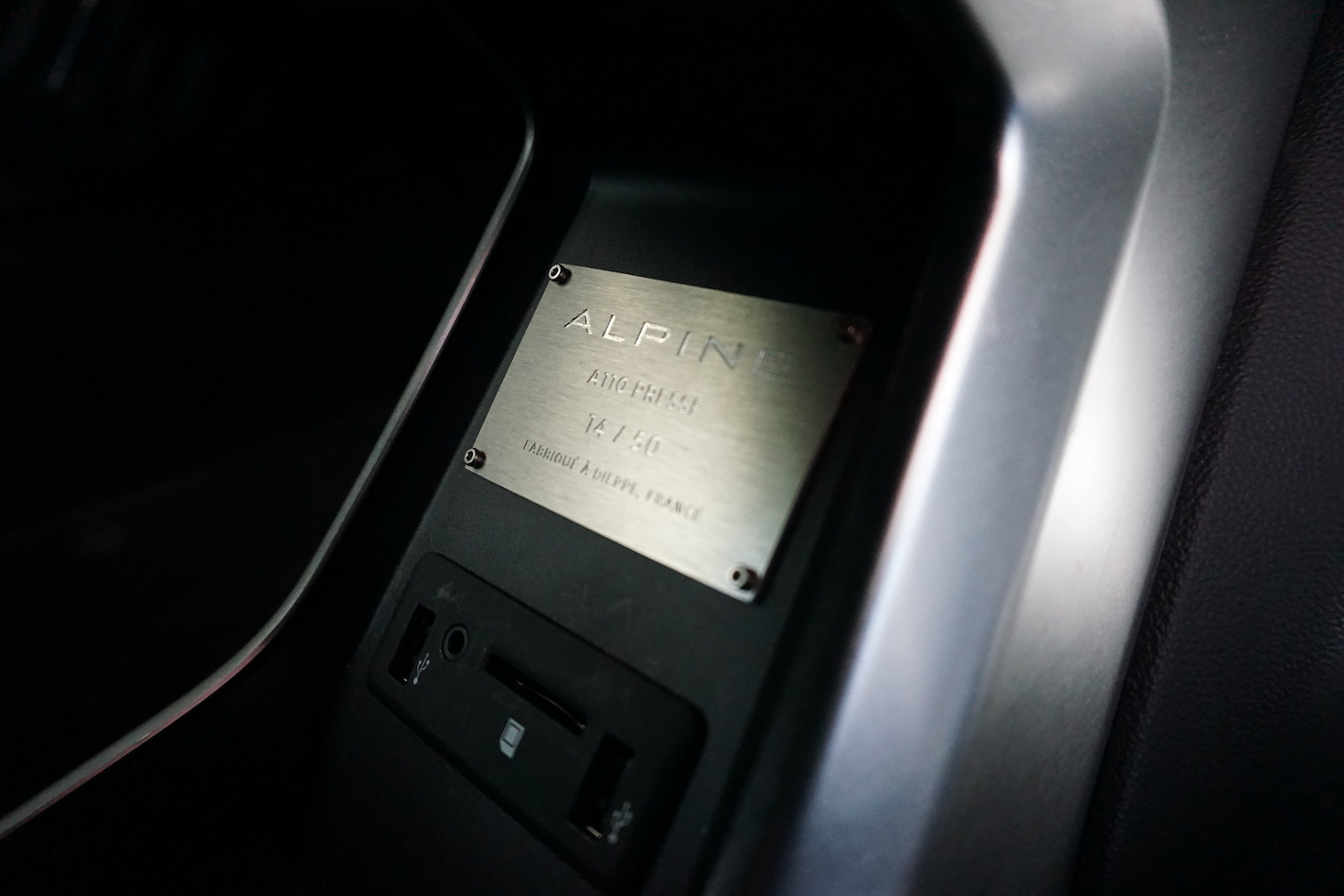 A rather unique test car…
We drove a rather rare Alpine. It is of course registered in France, as it is a works car, and it bears the number 14 out of 50. Indeed, a small pre-production series of 50 cars (not even that, we were told only 43 or so are actually made…) is built for press, demo and event purposes, and remain in the factory stable. Then the initial series, “Première Edition”of 1,955 cars – the year when the first Alpines were built – is produced for clients. Launched at Geneva 2018 were two new versions of the A110 – ‘Pure’ and ‘Légende’. These are available to order now.

We couldn’t resist taking shots of our elegant Alpine whenever we had the occasion during the non-timed stretches of our GT Tour between the special stages, as the pictures show. Speaking of taking nice photos of this timelessly pleasing Alpine, it is also good to know that Alpine has teamed up with Leica and has set up a ‘Hit the Road’ photo contest this year. The results will be on show at the Leica Store (Paris/France) in December 2018 and at Alpine Centres in Europe and at the Havas Gallery (Puteaux/France), in the Havas photography section during 2019. 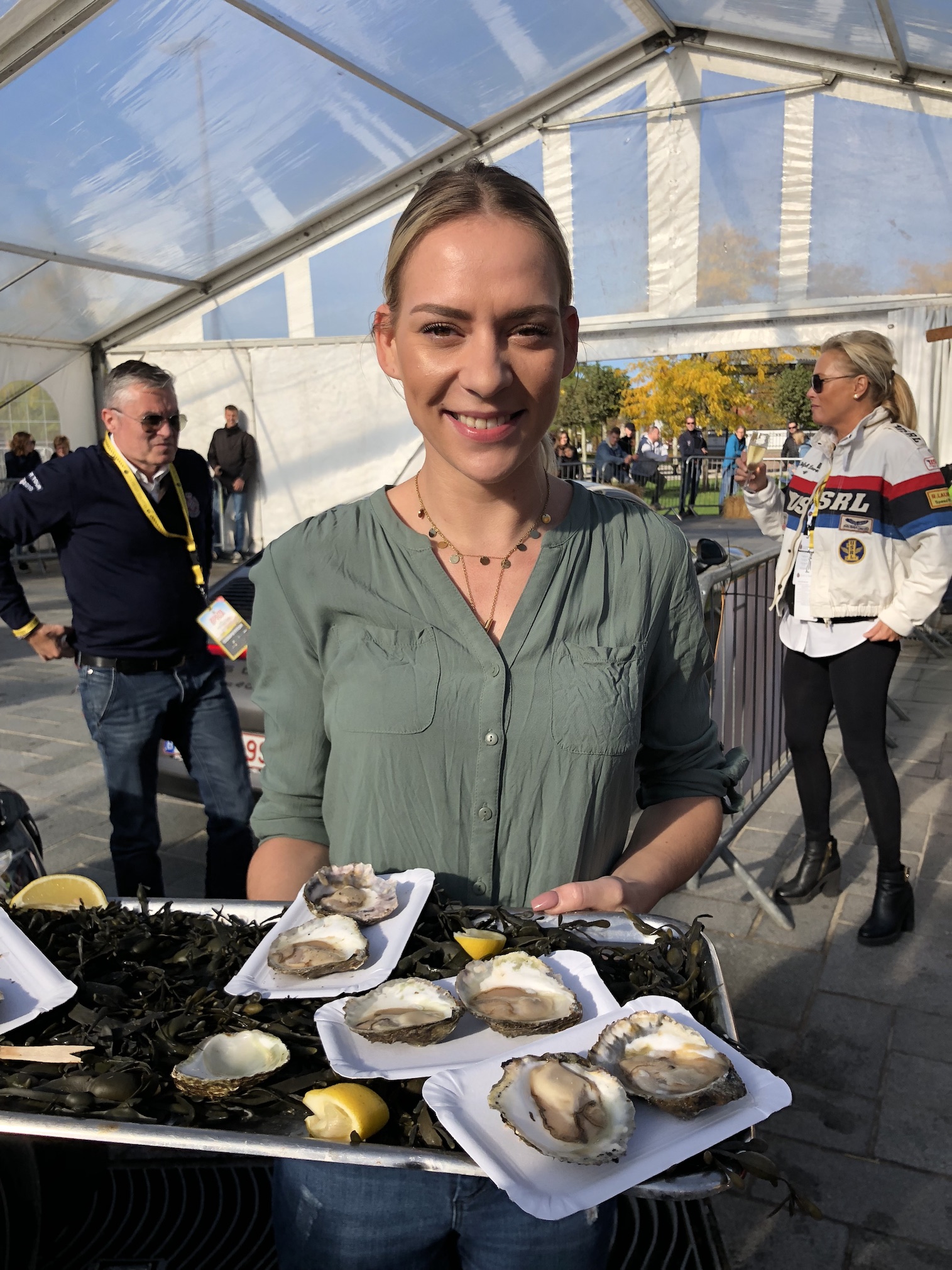 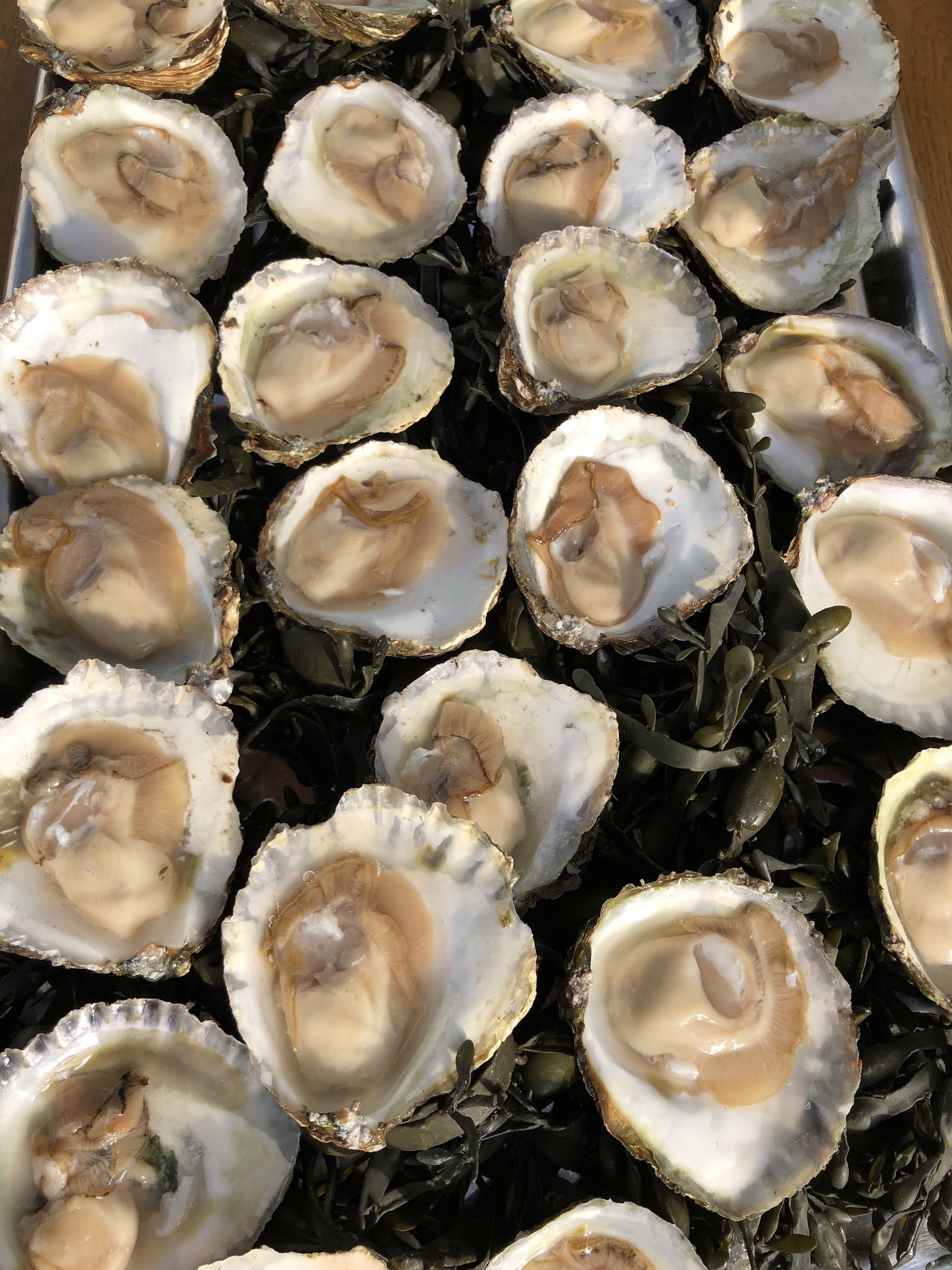 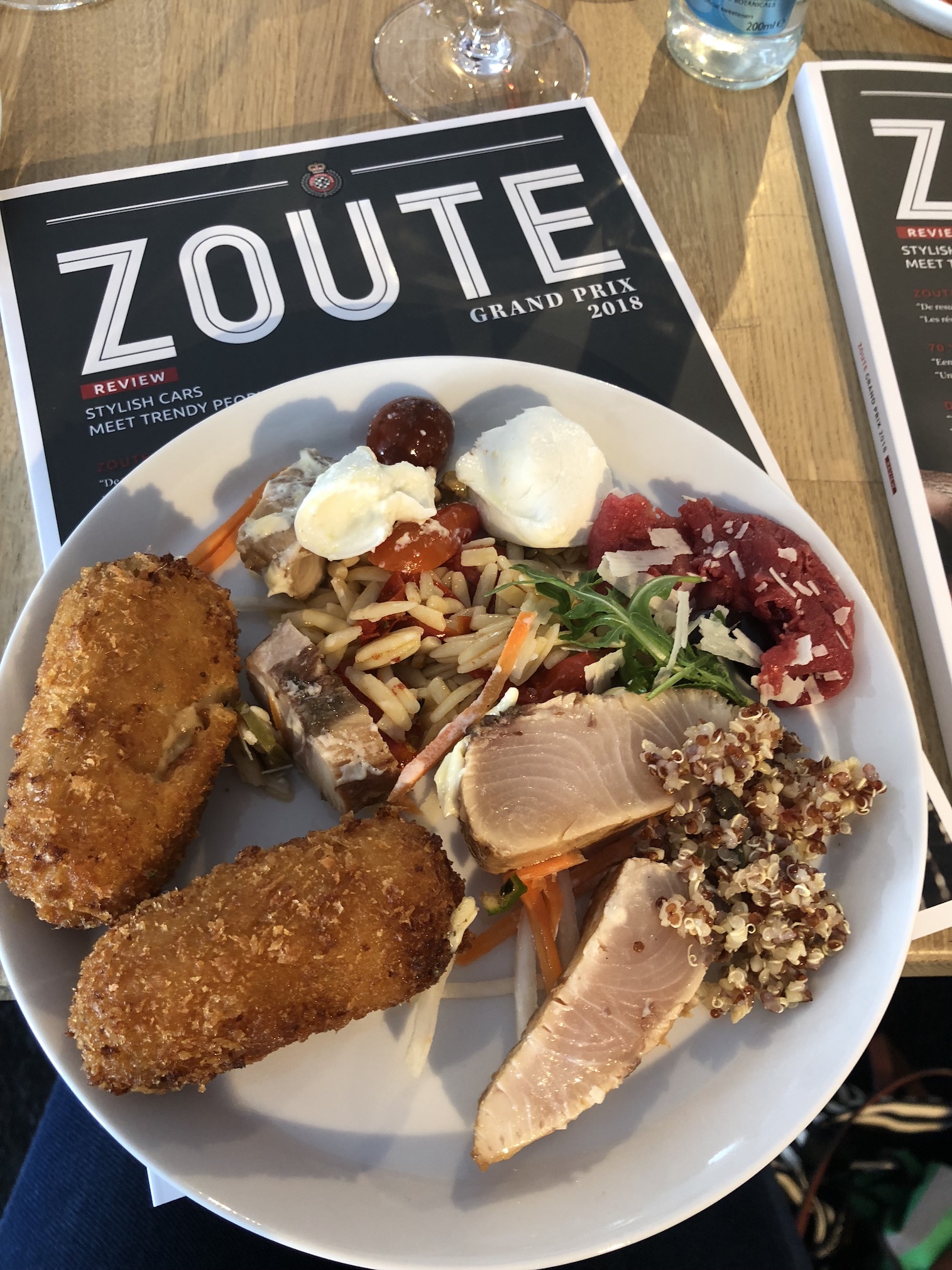 One last word about the marvelous organization of this event. Indeed, the Zoute Grand Prix has reached an absolutely high level of professionalism, and this goes for the selection of the tour itinerary, the accuracy of the roadbook, the special stages, the catering, the indications of the marshals, the smoothness of operation at start and finish, the driver registration and debriefing, down to a magnificent Zoute Grand Prix app on your smartphone or tablet which keeps you informed throughout and after the event of all the team and driver info you could ever wish. 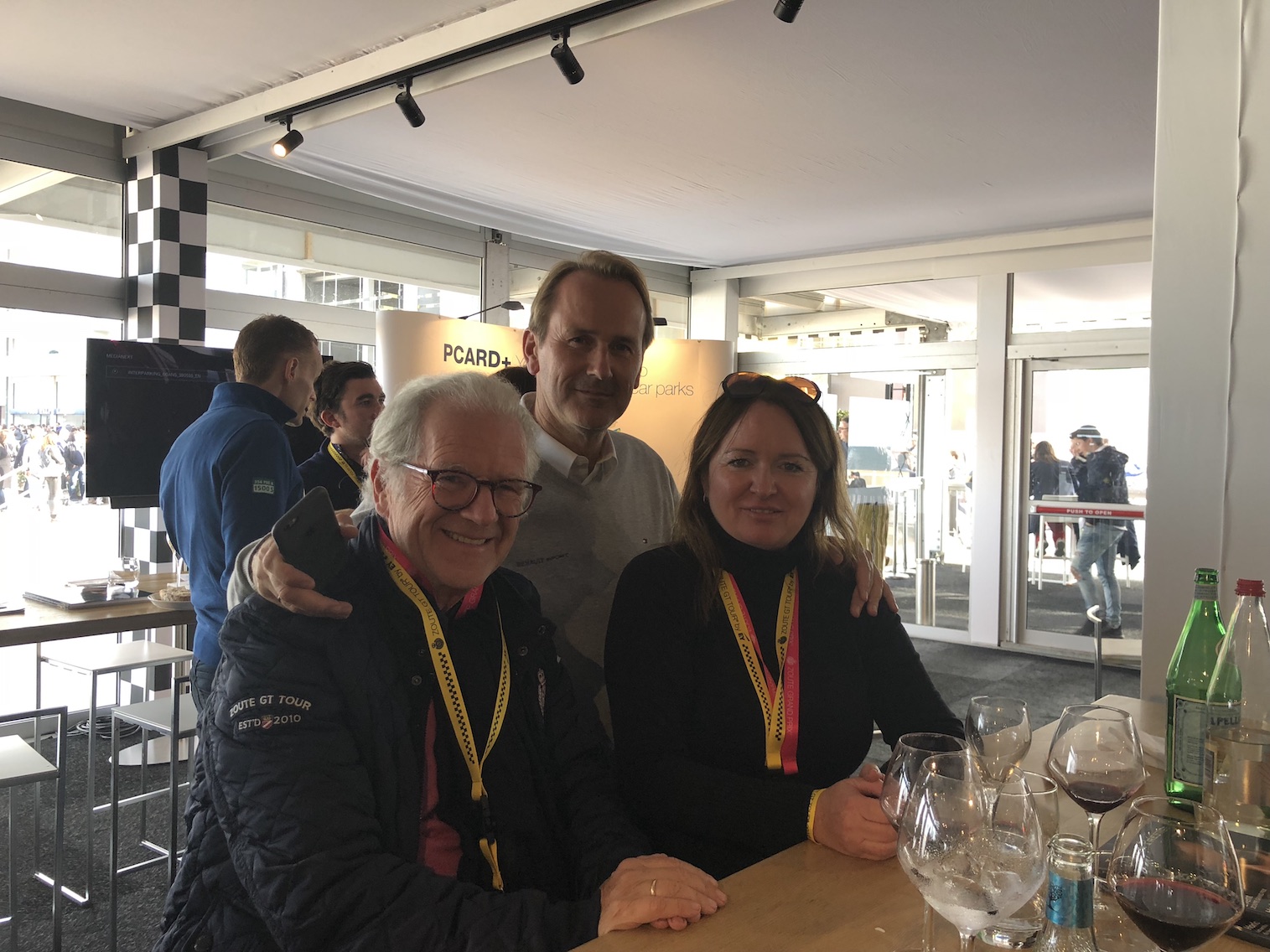 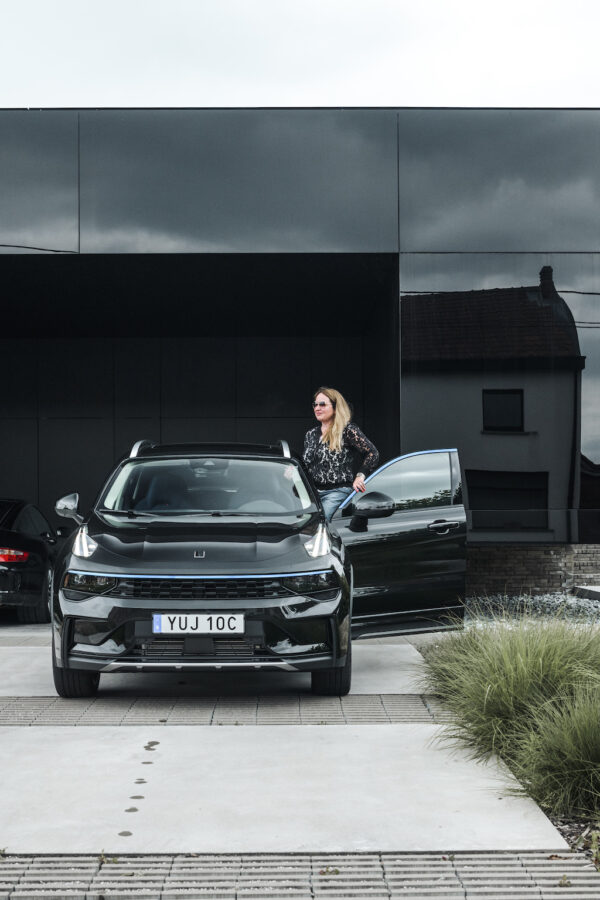 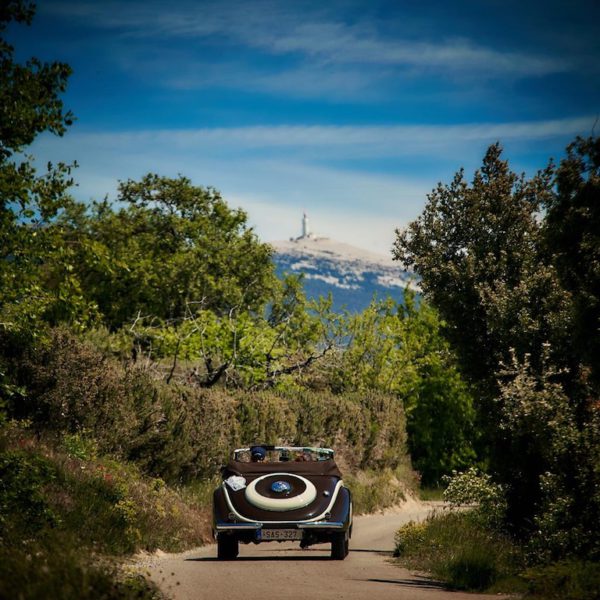 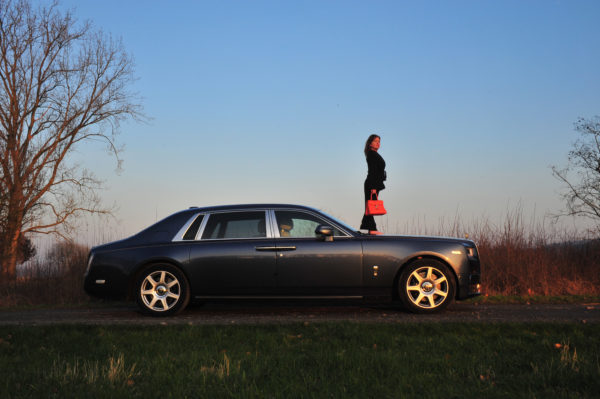