Is it their style, their strong identity or their promising features that might make them a design icon? It is difficult to explain but some watches just have it. March LA.B is such a brand and choosing a model within the range seems a difficult thing to do. So many of the watches our WOW! No wonder that even the French president Macron wears a March LA.B.

A few months ago a series of refined watches caught our eye in the A Luxury Approach press show room in Brussels. They were all green and had a strong and unique identity through discrete details. The watches happened to be part of ‘The Green Line’ range from March LA.B., a French watch brand we had never heard of before but which we were very willing to find out everything about. So we took the train to Paris in search of the secrets behind the brand. 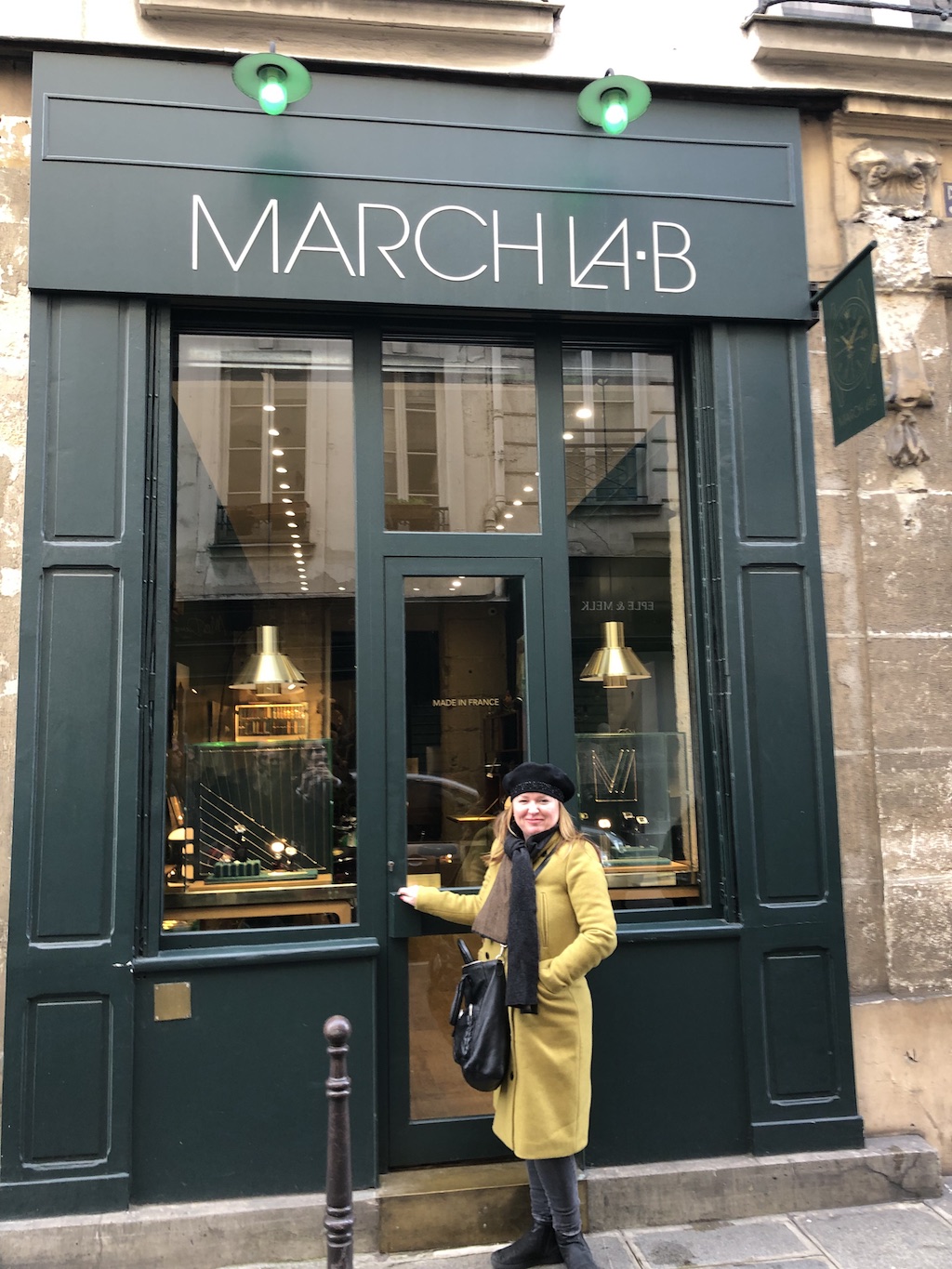 We write 2008 when Alain Marhic, now ceo and founder of March LA.B, makes the audacious decision to quit his job as Director of Operations for the eyewear and watch divisions of the Quiksilver group to start his own brand. The sport enthusiast and father of four, decides to surrender his life to his passions: surf and watches. 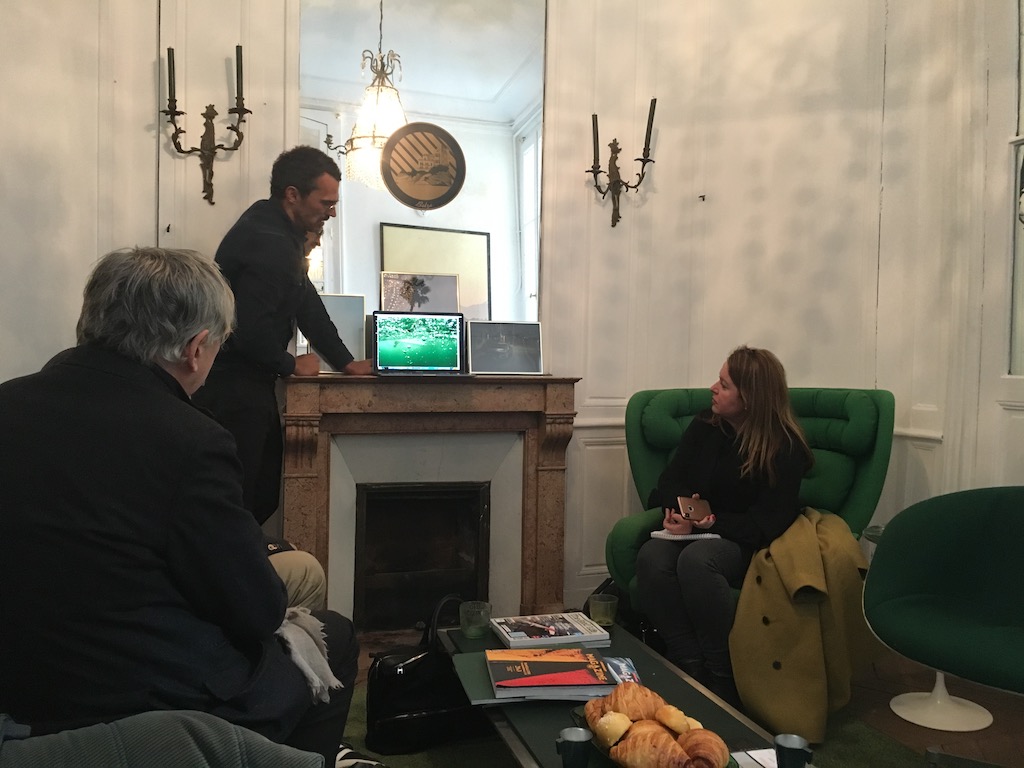 As Alain’s father, Alain himself and his two brothers are all born in the third month of the year, the month of March has a special meaning to Alain. Combining this with the offices of the brand based in Los Angeles (L.A.) and Biarritz, the name March LA.B comes to Alain’s mind. From that moment on the March LA.B odyssey begins but Alain doesn’t go the direction he went with Quicksilver. “At Quicksilver I focused on wetsuits and (sun)glasses and the watches we made for the brand were more easy to wear Garmin-style watches”, Alain tells. “With my private label I wanted to go a whole new direction but when I visited the factories in Switzerland it appeared that no one wanted to help me with my new label. In 2009 March LA.B was founded but it took me about two years before the first watches were ready. I noticed that the watch industry is mainly dominated by big players that merely serve classic style watches. I also noticed a gap in the medium price range and a lack of elegance in the design. Moreover I was missing vintage watches in this segment. Big players reserve their vintage style watches to collectors without revamping them for a wider market. I wanted to launch a lifestyle brand with an interesting and fascinating vintage style collection.” 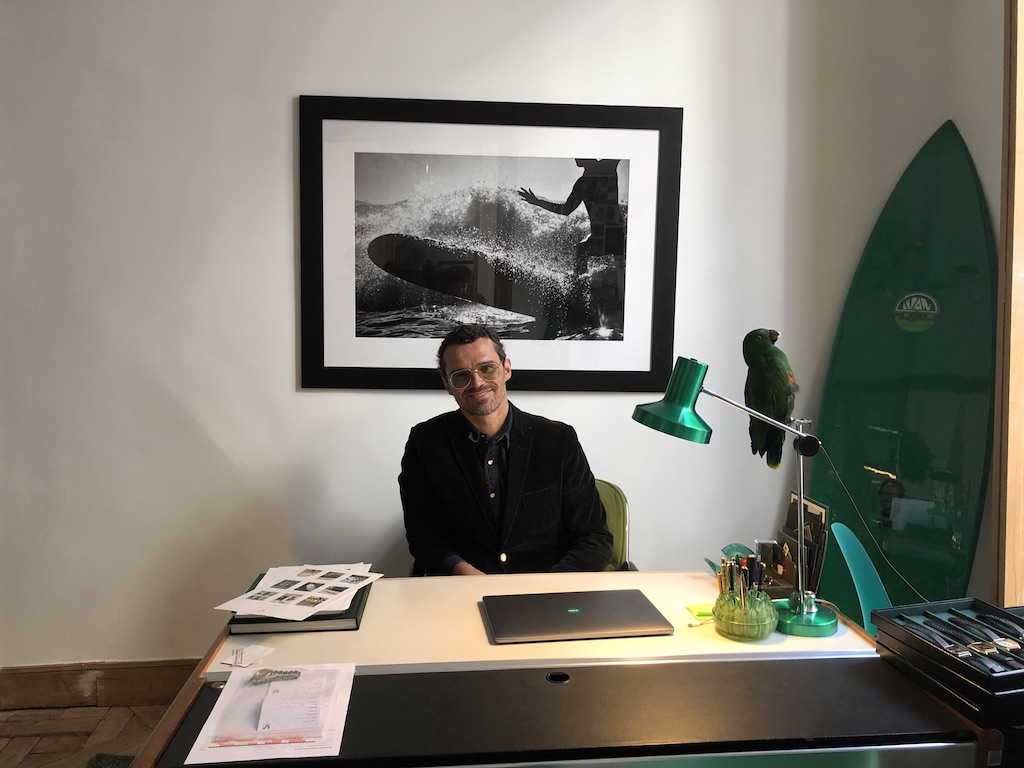 Alain Marhic, ceo and founder of March LA.B in his Paris’ office.

Alain Marhic surrounds himself with the right financial people under whom Joseph Chatel, co-founder and former president of DNCA Finances and founder of Pierre Premier Gestion. One of his other associates is wonderchild Jerome Mage who now is Creative Director of March LA.B. 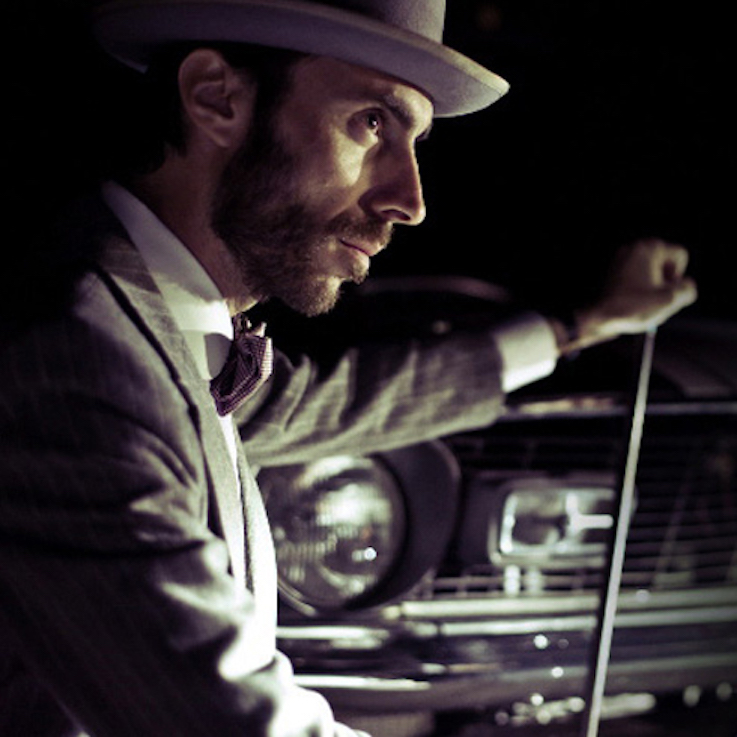 At the age of twenty Jerome Mage had left France to go and live in Los Angeles where he quickly found himself in charge of the creative direction of a major action sports eyewear company. An expert in mixing fashion and technology, he founded his design agency in 2001. Passionate about history, especially all things related to the French 1st Empire period and Napoleon but also to Ford Mustang, Jerome Mage is an atypical designer. He is a man of contradictions and passions, a true dirty dandy with a hint of retro-futuristic. So, it should come as no surprise that March LA.B is a tribute to the timeless elegance of vintage watches; a unique blend of French and British inspired retro styling. Rooted in vintage inspiration, the brand’s timepieces are refined in their simplicity and assert the philosophy that less is more. “We want to create classic watches with a modern twist, elegant but easy going at the same time. Our biggest concurrents are Junghans, Meistersinger, Hamilton and Seven Friday but the latter appears to be more technical.” 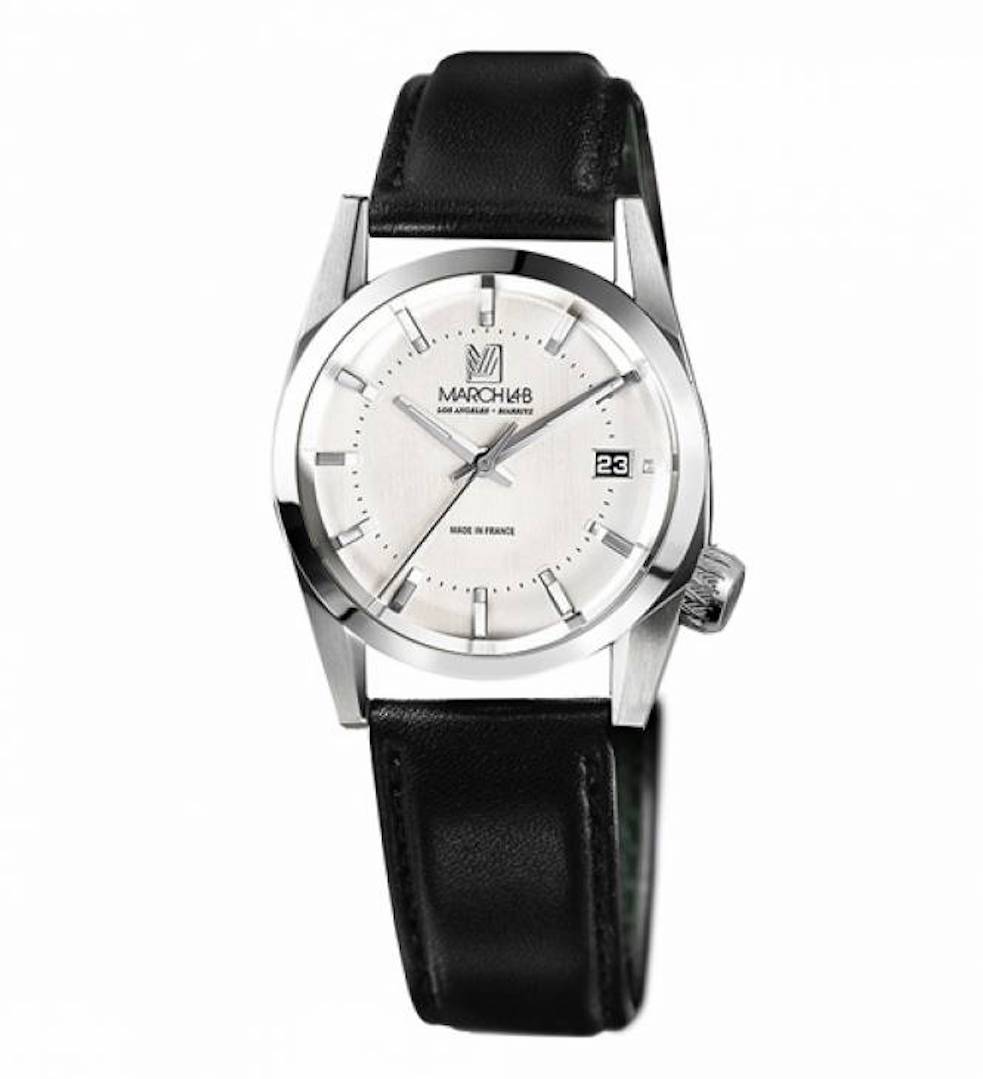 Even the French president Macron wears a March LA.B. more specifically model AM69 with quartz movement. “He did not want to wear an expensive watch.” Photo March LA.B 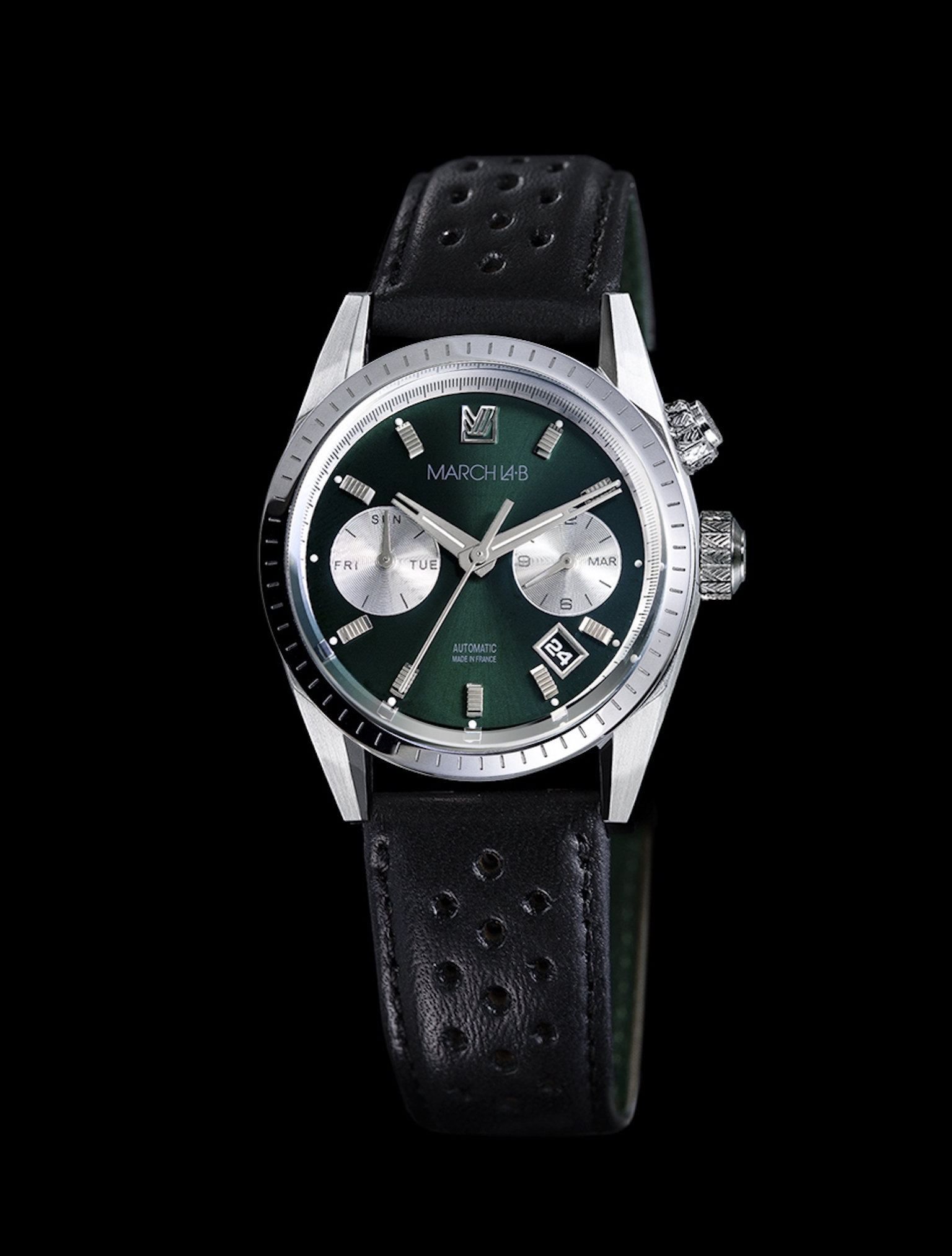 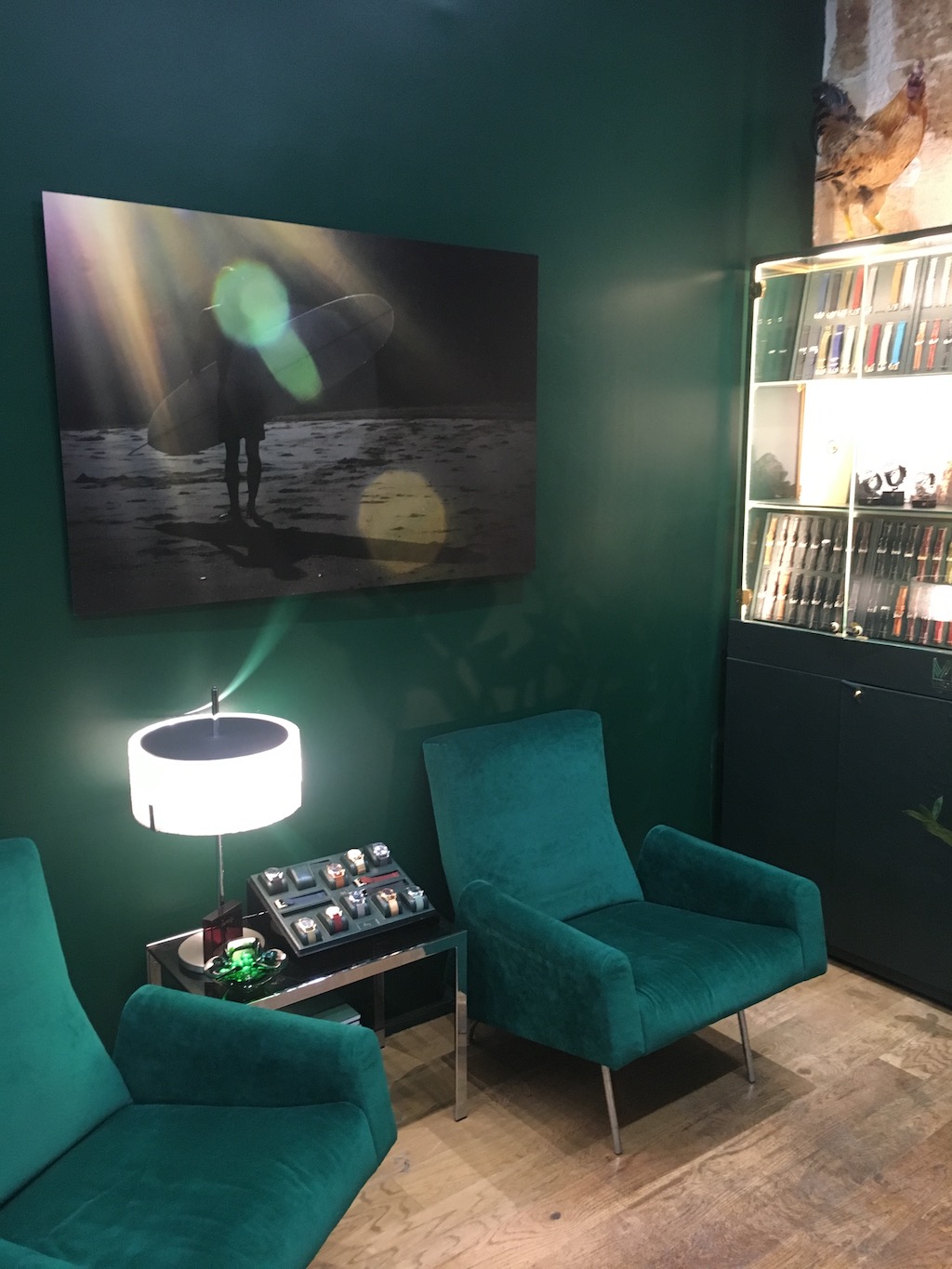 Green is a recurrent color code in the brand’s creations and world. “My mother used to dress me and my brothers with similar quotes in different colors. Blue and red for my brothers and green for me”, Alain tells. “On the other hand the green color symbolizes life and the March LA.B Green Line expresses our will to assist associations in the work of suicide prevention, a socially taboo affliction that particularly concerns the lives of those involved with the brand.” Suicide imposes public denial, and the danger of silence that accompanies it. By donating 1% of its benefits to associations helping suicide prevention, March LA.B wishes to fight this silence that kills.
The March LA.B ‘Green Line’ is synonymous with a subtle green signature through discrete details. The number 3 of the customized date is not white as all the other numbers but in glass reminding Alain’s favorites month. The lining bracelets are stitched in the emblematic color and the bright « skeleton » background on the automatic versions also got a hint of green.

In 1957, an American Peter Viertel, sets foot in France with a surfboard in his bags. He travels to La Côte des Basques, Biarritz. The local kids from the coast discover with him the thrill of surfing overseen by a majestic property, the Villa Belza.
Surfing is born. As big surf enthousiast Alain Marhic constantly finds inspiration in surfer’s paradises. A watch dedicated to Villa Belza was born a few months ago. 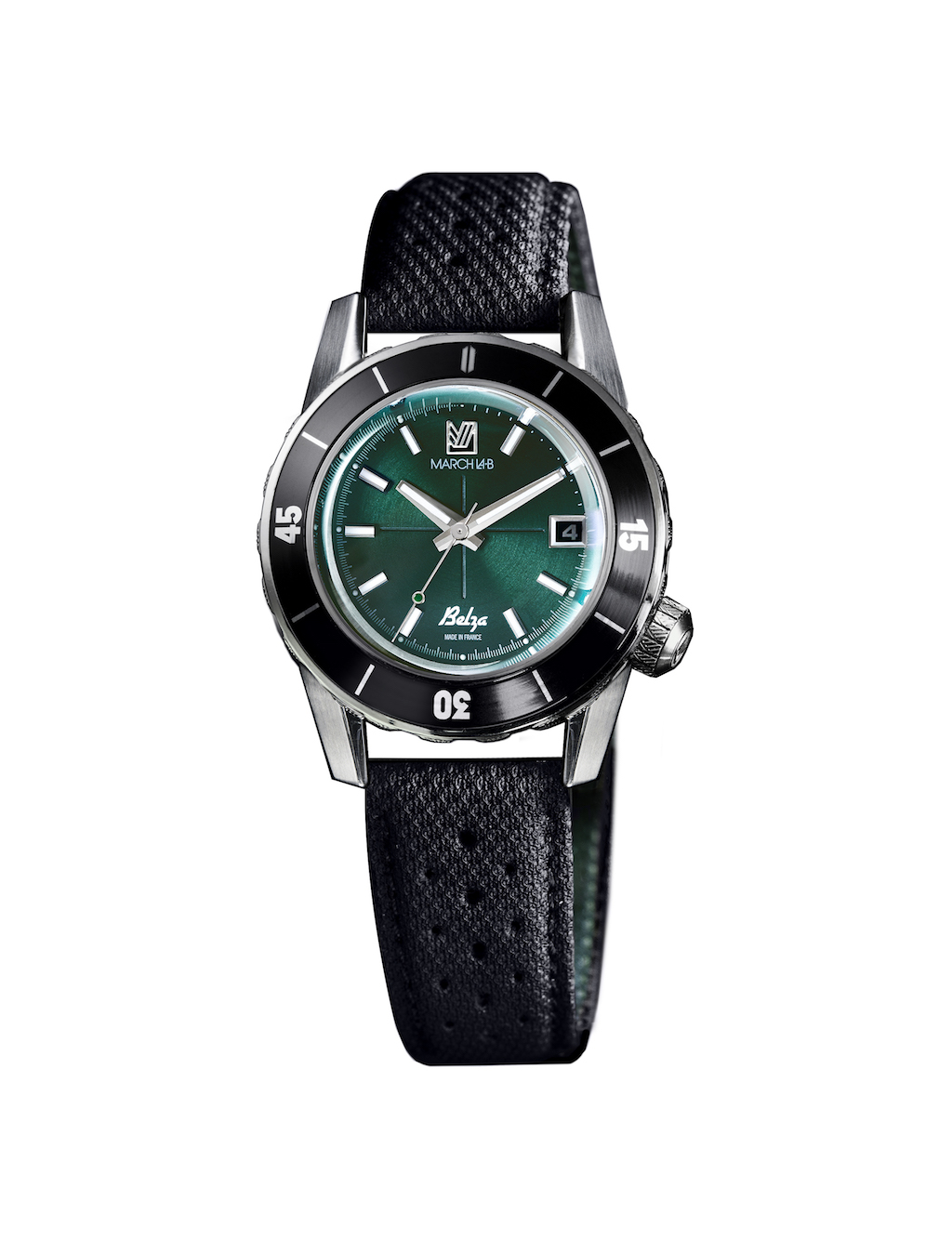 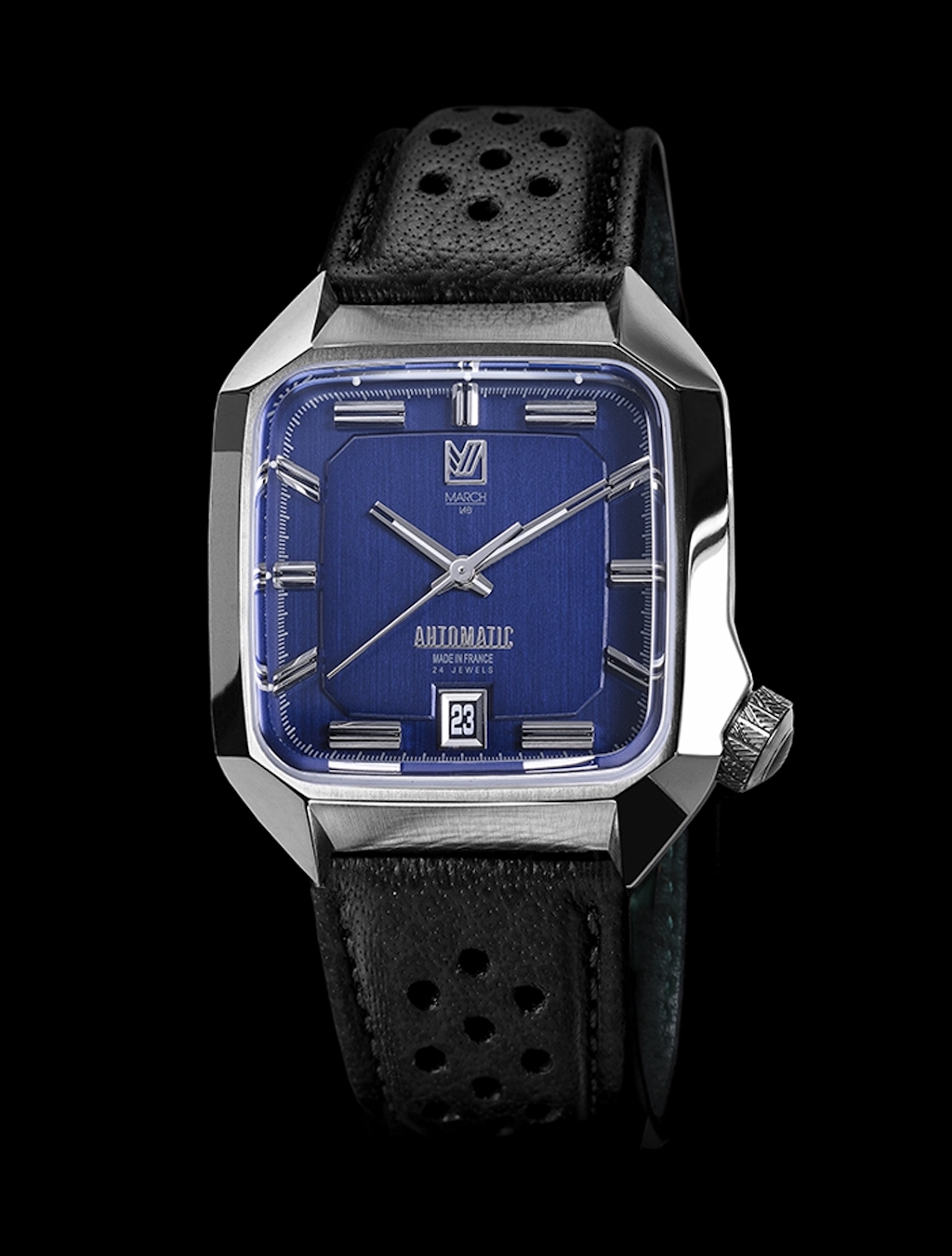 The March LA.B AM2 square model is the best selling watch of the brand and exists in many different colours. © March LA.B 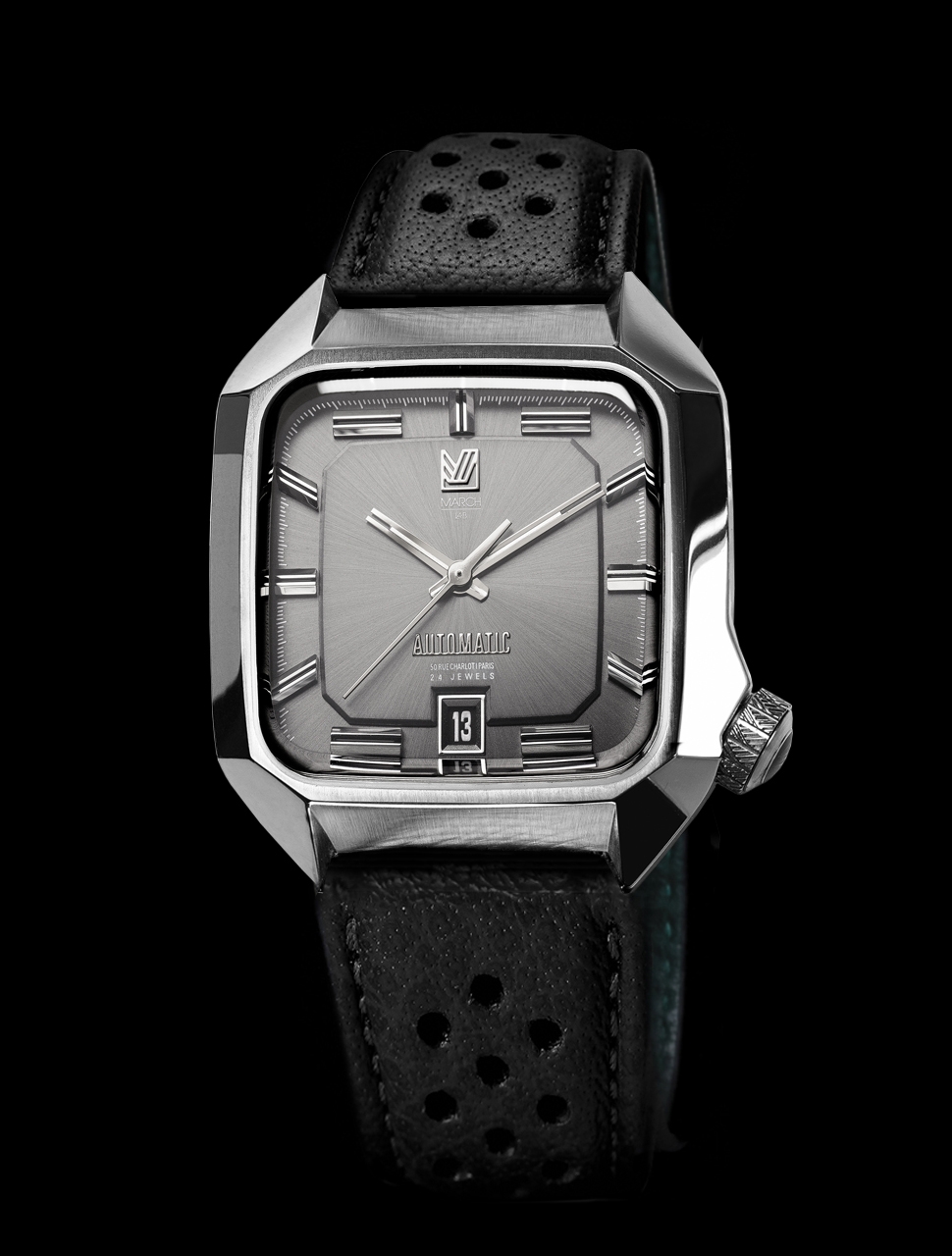 “The crown at four o’clock makes some of the March LA.B models very recognizable but in the beginning it was something we have chosen for ergonomic reasons”, Alain tells. “The crown at 4 o’clock is much more practical when you exercise sports.” 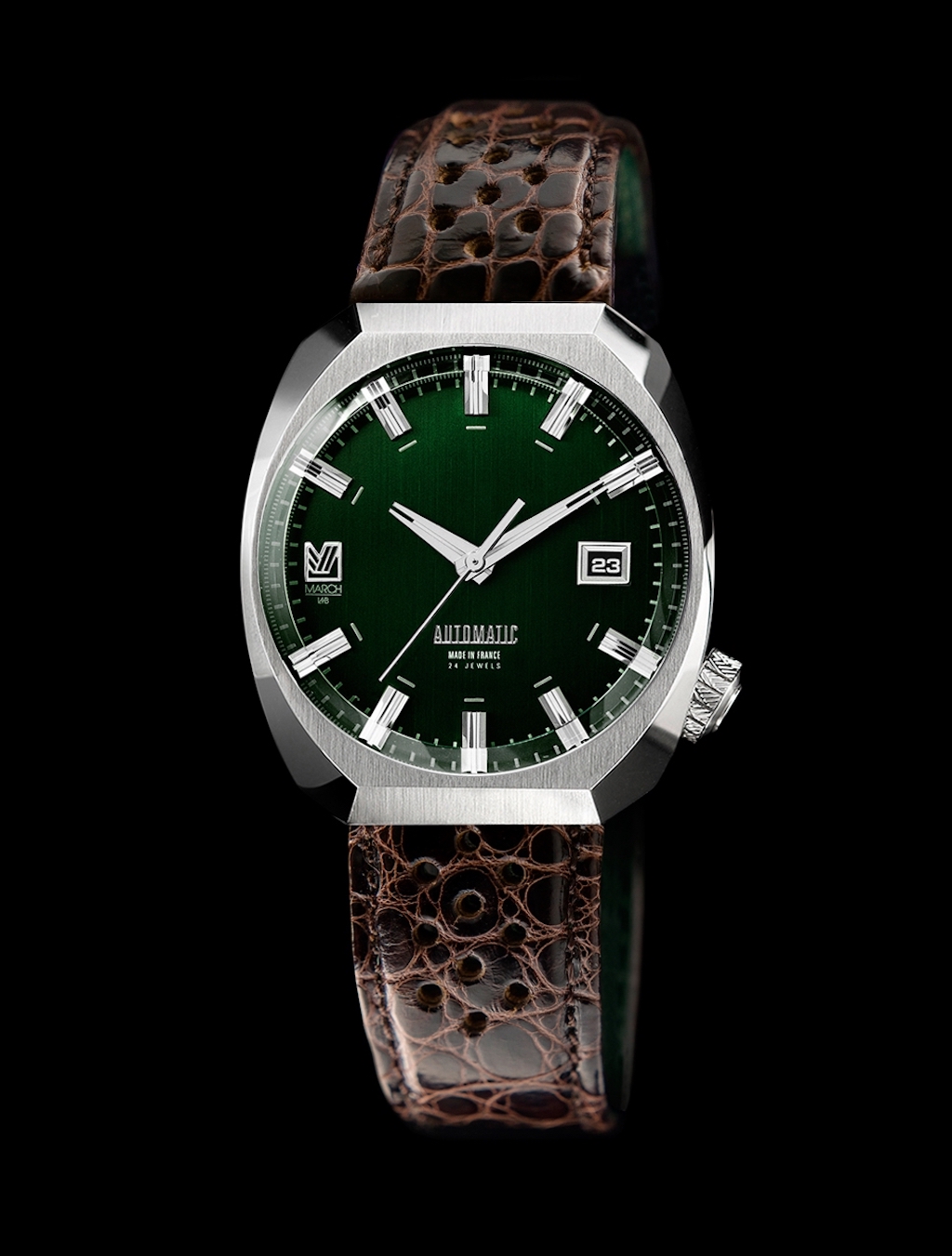 The hands of the AM3 have a unique “tuning fork” shape, one of the signature features of the brand. © March LA.B

March LA.B mixes the ambiance and style of 60’s and 70’s luxury with contemporary manufacturing and remarkable detailing. 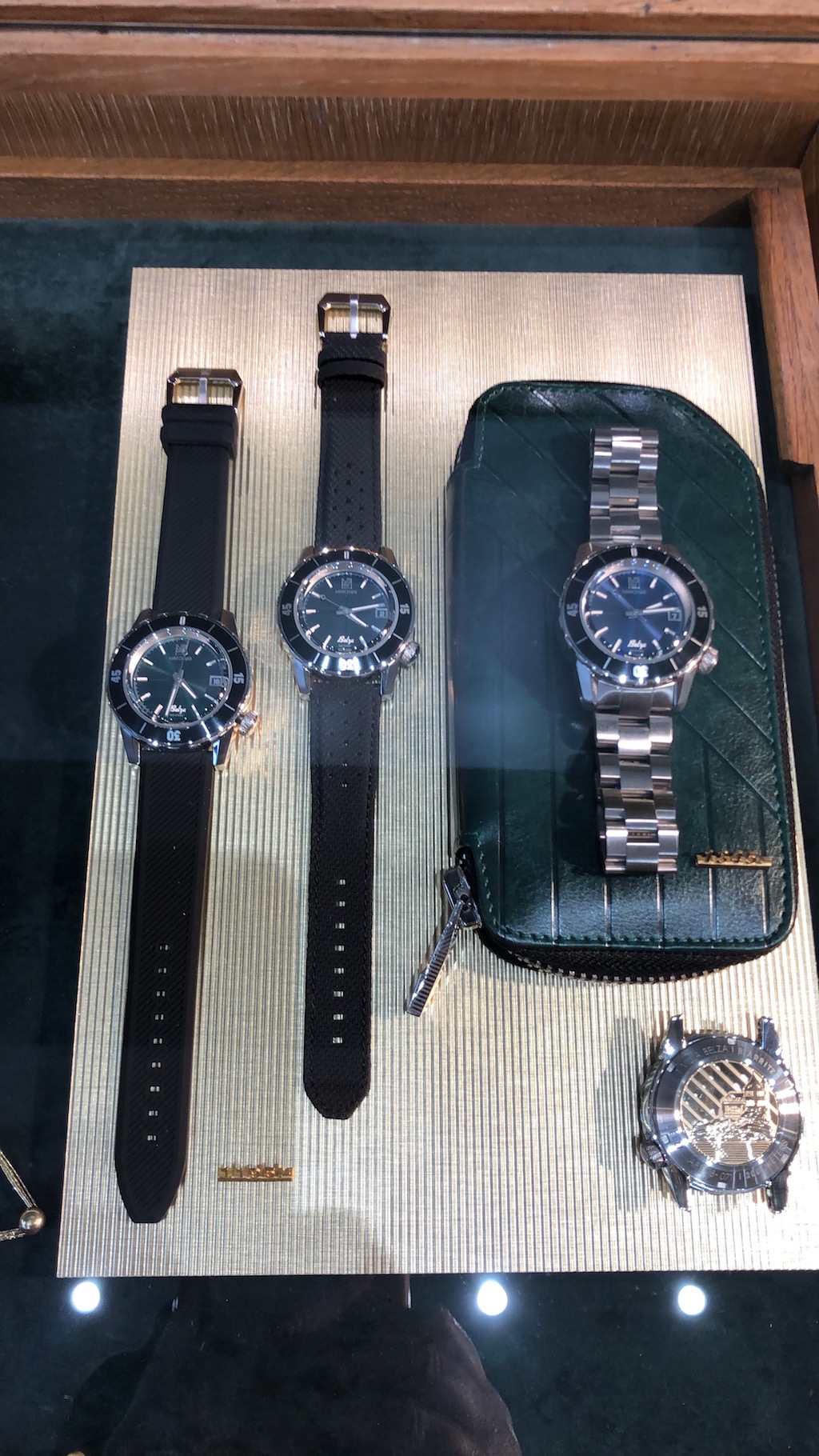 All watches are assembled in Besançon (France) and also the leathers come from France. Needless to say that the finishing is high level. The quartz watches are equipped with a Ronda movement, the automatic watches with a Miyota movement. 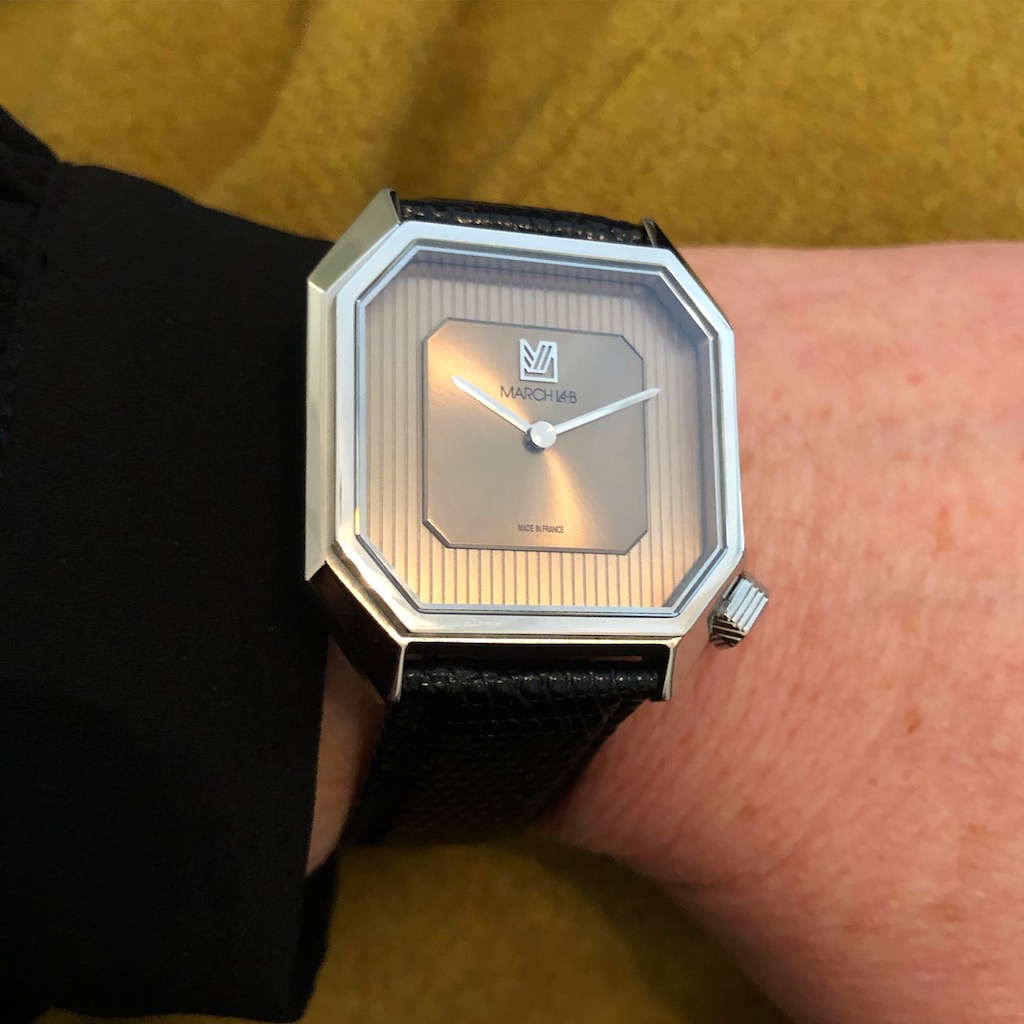 “Our self-imposed creative requirement is to design timeless styles that will transmit to future generations, following the example set by the most exceptional watches of the past decades”, Alain tells. That sounds very promising.

In Belgium for sale at Juweliers Bosmans – Aalst 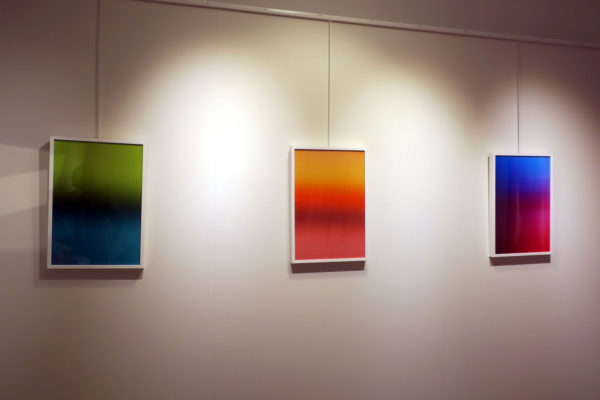 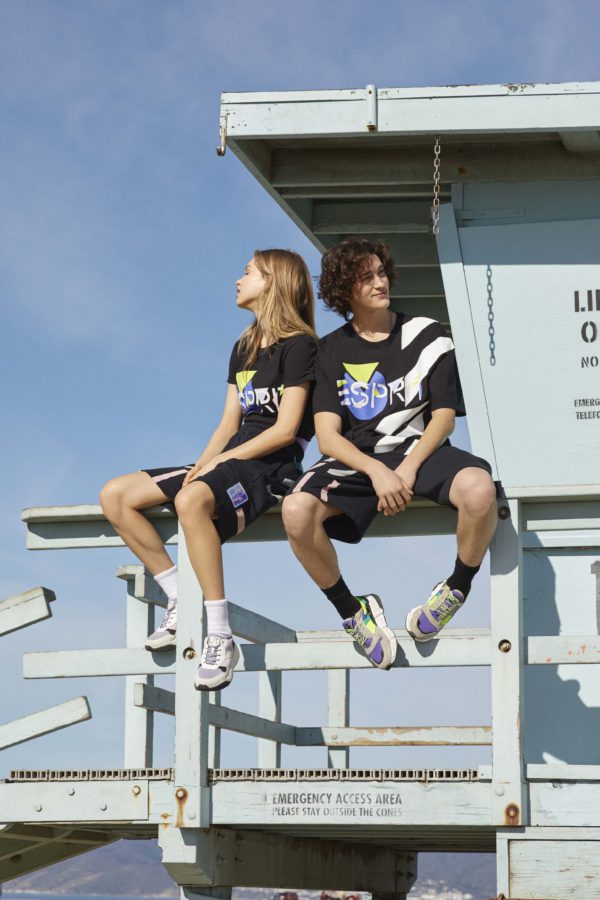 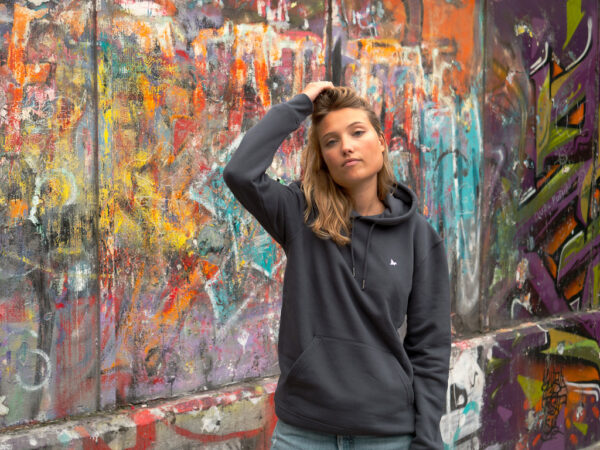